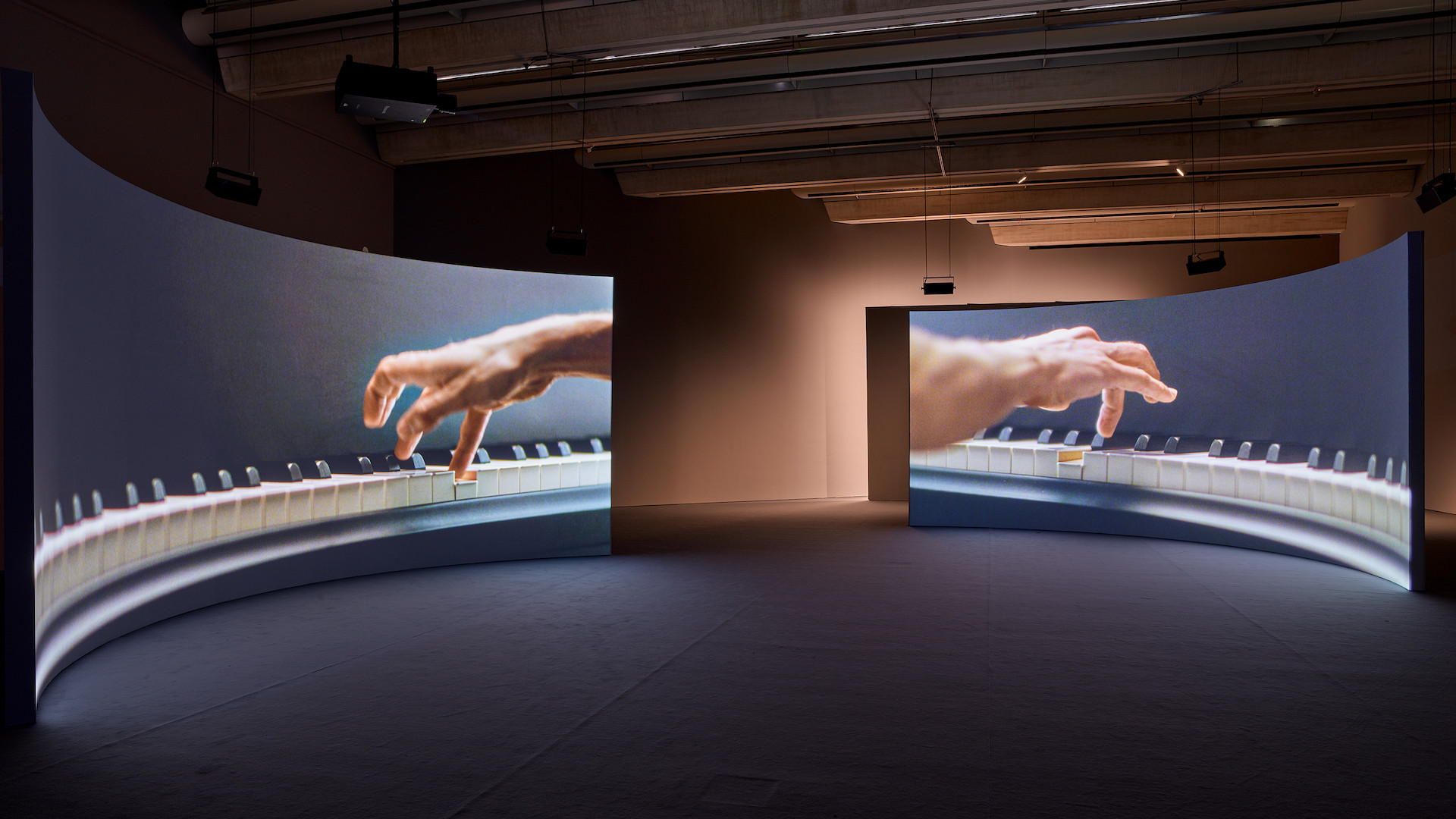 Rarely does a solo show seem to have so neatly found its place inside a museum that is nevertheless reputed to be hard to occupy, because so many nooks and crannies and tight corners seem to thwart a natural inclination on the part of curators to fill white cubes. If Anri Sala’s praxis appears thoroughly suited to the specific features of the Mudam venue, this is perhaps because the works in this exhibition, which feels a bit like a retrospective in advance, prefer a relationship with music. An extremely powerful, almost carnal, relation, with the artist not hesitating, as in The Present Moment, to get to grips with the very syntax of Arnold Schoenberg’s musical works, revisited from within and scripted in such a way that they free themselves in a spectacular way from the architectural setting, and assert an extreme quest for this present moment which provides the work’s title. A present which seems to keep at some remove the artist’s early experiments, in a period still aware of the passage of time and historical perspectives.

In the video Intervista (1999), the artist re-created the silent film archive of an interview with his mother, helped by members of the institute of deaf-mutes who managed to lip-read her, an interview dating back to the period when she was still a sincere “militant” campaigning for a Marxist-Leninist regime which barely permitted any deviation from the official line of the Albanian party led by Enver Hoxha. The trouble that lay in store for that mother, because of the remembrance of her “involvement”, prompted her to justify herself by saying that at the time everyone spoke with the same voice, while at the same time causing her to become aware of her tacit support of those illusionist principles. The political thread that had since seemed to disappear from the artist’s activities reappeared with the soundtrack of one of the pivotal works on view at the Mudam, Take Over (2017), through the arrangements and dis-arrangements to which the artist subjected interpretations of La Marseillaise and L’Internationale, whose two simultaneous projections face each other on two facing, curved screens. In the catalogue accompanying the show, philosopher Peter Szendy offers us glimpses of the cinematic, historical and semantic bonds woven within this double projection, where the anatomical phalanx echoes a troop of soldiers from Greek Antiquity: visually, the movement of the fingers on the Disklavier—the mechanical piano—appears like a small commando group that is literally attacking the movements of the automaton and jamming them1, while the piano keys, raised by the pianola’s mechanism, appear like so many phalanges in action. The allegory of the fratricidal battle seems all the more cogent because the two songs are inbred, the tune of La Marseillaise having been taken up again to momentarily become that of L’Internationale. Our understanding of this work by way of the musical filter is duplicated by a line of thinking about the watered down influence of these seminal anthems on the progress of the world, and about the disappearance/invisibilization of the violence they contain (“Qu’un sang impur abreuve nos sillons”—“Let an impure blood water our furrows…”). The fluidification of these revolutionary words has worked so well that they have literally evaporated in the ceremonial amnesia of July 14th ceremonies and Communist Party congresses.

It seems a long time ago that Anri Sala turned the page that linked him with his own history, and the change in political government in the country of his birth. The wholesome impact of  Intervista drew a line under the illusions spread by successive rulers. Dammi i colori, produced a few years later (2003), confirmed the bursting of the neo-Stalinist bubble which turned into a becalmed social-democratic variant, in a video presenting the mayor of Tirana, Edi Rama, who has decided to disguise the decay of the capital’s buildings with a cosmetic makeover that calls to mind the wiles of a figure like Potemkin.

From this point on, Sala no longer seems interested in the vagaries of a history on the move, preferring the quest for the intensity of the moment. I say ‘seems’ only because, like Take Over, the reference to history is still there, even when it makes lengthy detours: in The Last Resort, it is that colonialism pinpointed by the reconfiguration of Mozart’s concerto for clarinet in A major, K. 622, and in the series of drawings Untitled (Maps/Species) (2018-19), it is still the rationalizing utterances of western countries that is being denounced. But the most decisive work is certainly The Present Moment (2014), an installation which organizes the dismemberment of Schoenberg’s Verklärte Nacht (Transfigured Night) (1889) into many different fragments which the artist brings together at the end of the process while deploying nothing less than a cinematic strategy involving fixing the eye on selected moments—close-ups of an elbow and an arm, suspended in a continuous present. In this work, which fills the museum’s main room and saturates it with its quasi-vacuousness (two white screens, blank for most of the time, and a row of speakers on the ceiling), the artist has offered himself the luxury of “over-playing” Schoenberg’s music by applying to a composition from before the invention of his famous dodecaphonism this latter’s selfsame principles.

Is the quest for an absolute now, which Szendy talks about and which is at the basis of this work with its spectacular development, the diversion, the short-cut, the bending2 which Sala gives to his public: a musicalized present, frozen, responding to the instrumentalization of progress by all the bearers of political messages? A final work prompts us to think about this possible interpretation, If and only If (2018), where we see a snail clinging to a violin bow seemingly indifferent to the motion of the musician, who still continues to play his tune. Although the snail is supposed to take more time to move along the bow than the musician takes to perform his music, this latter strives to synchronize it with the animal’s journey by stretching out the melodic lines, a way, once more, of slowing down time, and bending it, to refer to the exhibition’s title. Oh time…