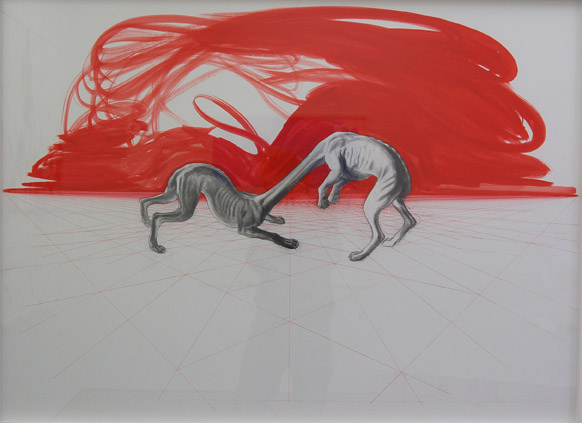 He synthesized the artist as an ecosopher (in Relational Aesthetics1), a postproducer (in Postproduction2), a programmer (in Formes de vie), a semionaut (in Playlist, Palais de Tokyo, 2004), a time vector (Expérience de la durée, the Lyon Biennial, 2005). Nowadays, he deals with artists who search our present time as a lost civilization, artists whose works could represent an attempt to refer to our after condition, as could say Hal Foster3. So we asked Nicolas Bourriaud about the significance of the asynchronous strategies today’s artists use.

Your recent exhibitions, notably Strates, at Murcia, and La Consistance du visible, coming soon at the Ricard Foundation, feature a group of young artists with the particularity of looking backwards through time, of importing elements and techniques from the past.
I am thinking, obviously, of Cyprien Gaillard, but also of Raphaël Zarka, Lara Almarcegui, Diego Perrone, Laurent Tixador & Abraham Poincheval… This reinvestment in the past as material is what seems to set the 2K-generation apart from the 90’s generation, which, in a kind of crude contemporariness, readily absorbed the elements that were floating around in the culture of the time. You yourself often defer to the great thinkers in contemporary art, like Restany and Lamarche-Vadel, whom you regularly cite as the last two critics to actually catalyze a “movement”—even if the term “critic” seems insufficient to circumscribe their practice. Is this a way of saying that the past, having not much left to hope for, and through its intrinsic temporal authority, is the last remaining fortification against the future that begins today? Is archeology in the process of becoming the next science fiction?

To start off, I am not sure that we can use this “reinvestment in the past as material” as a clean dividing line between the art of the 90’s and that of the current decade. My Postproduction essay deals with more or less the same generation of artists as Relational Aesthetics, the preceding one, and attempts to analyze two different relationships to the past: the one, a turning towards history as a kind of “bag of tools,” and the other, a mode of interacting with historicized artistic forms, grounded in usage. The archeological dimension of artistic practice was already evident in Mark Dion’s work in the early 90’s. Can we really characterize the 90’s generation as the generation of “crude contemporariness?” Pierre Joseph is really the only artist that comes to mind to illustrate this notion. And even so: when he exhibits one of his paintballer figures, those “living, reactivate-able characters,” he sets it down in front of a Robert Delaunay. Philippe Parreno aligns himself less with the contemporary than with anticipation. Still, his work is populated by phantoms, like that of René Daumal, Rauschenberg and many others. To take one artist with whom I’ve worked extensively, it is enough to reread Liam Gillick’s “Erasmus is late” (1996), an archeology of London Victoriana, to see the extent to which his entire universe is haunted by history. What changes at the turn of the millennium is that the present suddenly transforms into the most fairly distributed thing in the world, if I can say so. The term “contemporary art” becomes problematic. What is it contemporary to? To a state of global production, I believe, be it the production of objects or of social relations. Too many artists think they are automatically “contemporary”. They forget to specify what being contemporary means for them—beyond, of course, being featured in the latest issue of Artforum. Surely, the reevaluation of the past in the art of the 2000’s smacks of this imperative, transforming the nature of the question itself: what is my relation to the roots of the present? Which narrative am I contemporary to? Art is a kind of alternative editing table for the script of reality, and these artists grab onto the codes and narratives that constitute our present, some of which stem from the deepest recesses of the past.

To come back to this caesura between the 90’s and the following decade, we might be able to speak of a kind of after-the-fact “fin de siècle” movement: oddly enough, a taste for mannerism and the baroque supplanted those practices more centered around immediate anticipation. Here, what emerged were two different types of time lag, both a refusal of the sovereignty of the “direct”. The exhibitions organized by Emilie Renard and Alexis Vaillant, to cite two talented French curators, play on this baroque current in order to shed light upon this bifurcated relation to the history of forms. And yet, the past’s colonization of the present stretches far beyond the domain of form; the “work of art” itself is in the process of imploding, crushed under the weight of complex and heterogeneous formations. In organizing the Consistance du visible exhibition at the Ricard Foundation, in commemoration of the 10th anniversary of the prize by that same name, I’ve set the thought of Roger Callois as my default browser. At the beginning of Cohérences aventureuses, we encounter a typology that I’ve been obsessing over for a while: “The forms are produced, it seems to me, by accident, through growth, according to plan, or by mold.” Today, the distinction between these four notions is disintegrating, calling us to rethink (and resituate) Callois’ notion of the “competition between art and life” within the age of the network.

You speak of the “authority over time” that the past affords: but can we really speak of authority here? Political storytelling is one example of this authority, one which concerns the present as much as it does the past.
I believe that our spontaneous perception of time is becoming more and more like the one Borgès describes: a garden with paths forking in two. In his brilliant book on the Danube, Claudio Magris writes, “There is no one train of time, advancing at a constant speed and in a single direction; sometimes we encounter another train coming towards us from the opposite direction, from the past, and for a moment the past is with us, next to us, in our present.” But I could also cite another writer who seems just as contemporary in his vision of the world—Winfried G. Sebald. His narratives freewheel through a space where fiction and documentary melt into one another; they describe the author’s wanderings across Europe, from Scotland to the Balkans, and show how the memory of people and events from the past constructs the space that surrounds us. Sebald points up traces of history in buildings, museums and monuments—even in hotel rooms, or in his discussions with the individuals he encounters. This form of drifting, linked to a spatialized relation to the past, is, for me, the major axis of the art of the 2000s. While I was putting together the Estratos exhibition at Murcia, which dealt with archeology and excavation, I realized that the past is just as important for today’s artist as the future was for the modernist of 1910: it is the axis around which we organize our relationship to the present. Yesterday’s futurism is superceded, not by a mere rehashing of the historical, but by an art of heterochrony, one which fuses temporalities and approaches the past as a terrain ripe for exploration, much like a Patagonia or a Cap Horn. In many of the works that interest me today, time seems to spatialize itself; we traverse it as we might a kind of supplementary space. Robert Smithson is a huge reference right now. But the only difference between “sites” and “non-sites” is a temporal one. His concept of “ruins in reverse” has become common currency in contemporary practice; artists seem to be more interested in the past of the future than in the future itself. What did “the past” mean for modernism? Tradition, which the new would gradually supplant. For the postmodern, historic time took the form of a catalogue or repertoire. Today (and I am deliberately situating myself somewhere beyond postmodernism), the past is defined through territory and usage, articulated in and through space. The centrality of the voyage and of nomadism in contemporary art, therefore, speaks first and foremost to our relationship with history. The ties that bind contemporary artists to the history of art arise out of a process of displacement, through the use of nomadic forms or the adoption of vocabularies linked to the “Other”. In short, the past is always present—as long as we are willing to travel back there, that is, like Pierre Huyghe did in Antartica.

What I’m really excited about now, and something that will constitute the central axis of Altermodern, the triennial exhibition I’m organizing at the Tate for February 2009, is the appearance of a new formal mode : the journey-form. The components of a journey-form are not necessarily assimilated into a unitary space-time; the piece can refer to a number elements that are absent, past or future. It might take the form of an installation connecting out onto other events or other places, or bringing together the exploded coordinates of a unique journey. In both cases, the work takes shape as a kind of unfurling, a ribbon of signs, an arrangement of spatial and/or temporal sequences. It is the index of an itinerary. What sort of “site” might such a work occupy? A site that is multiple, comprising the entire, articulated ensemble of its various modes of appearance. In my latest essay, Radicant, I attempt to consider the form of the work of art in tandem with that of the subject, through a critique of the notion of cultural identity. Taking cultural globalization and postmodern “multiculturalism” as my jumping off point, I try to write a plea on behalf of the subject, through in a dynamic form. The subject, here, represents an itinerary, a wandering, a sebaldian character forever a stranger to his environment. A radicant is a vegetal organism that pushes out new roots as it moves forward in space. My book is a tribute to the voyage as a mode of thinking, one which upholds time as the last terra incognita accessible to the artists of our time.