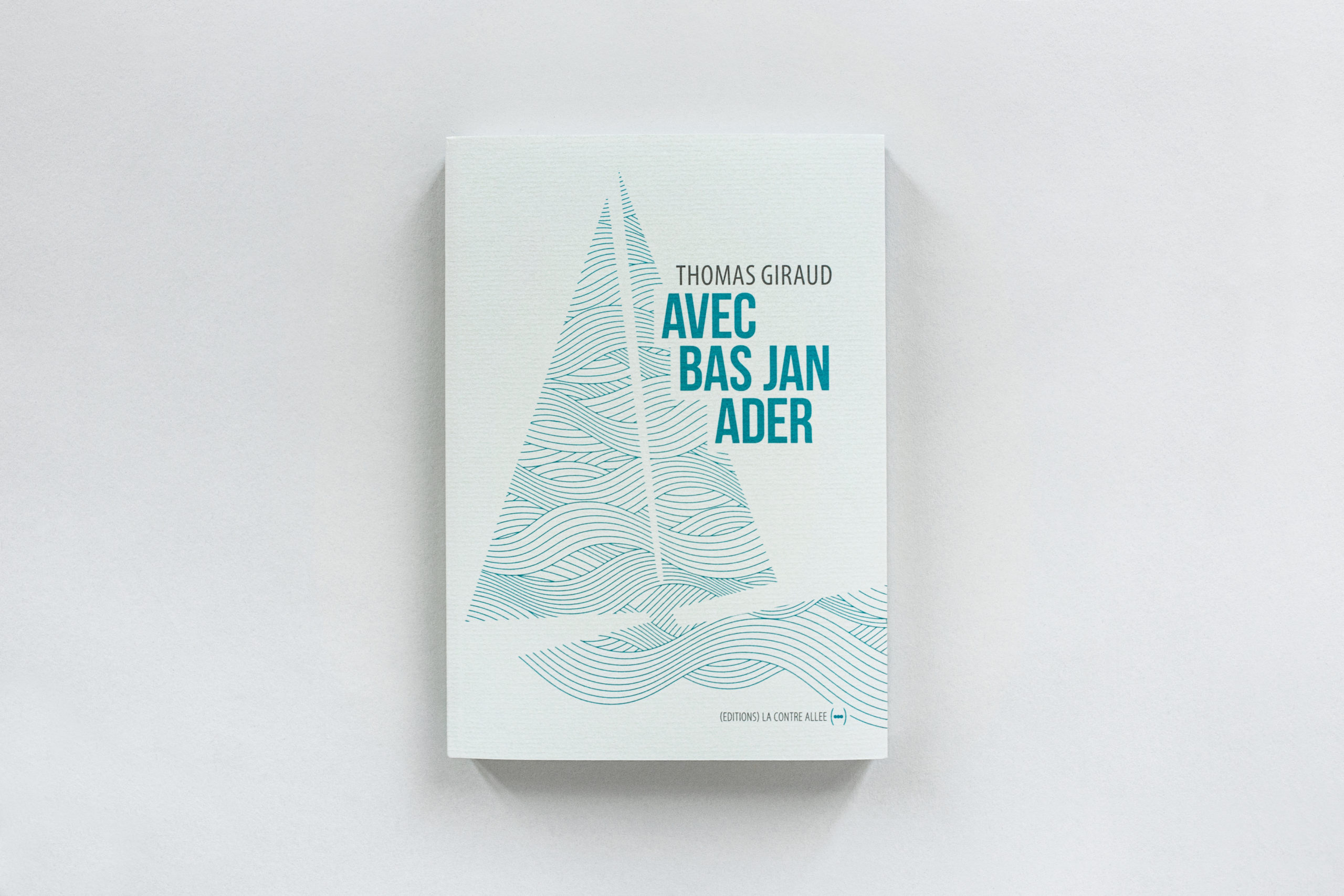 How does one become an artist? There is not really a user manual or recipe. A bit of chance, a bit of “breaking and entering”, a bit of family history, the loss of a father leaving you helpless in the face of life, being suddenly deprived of a guide, of direction, of support. In his book, Avec Bas Jan Ader, Thomas Giraud goes back in detail to the Dutch artist’s childhood and youth, though he does not claim to explain the origin of a vocation that he is careful not to consider as such. Rather, he simply sketches out leads and describes the bifurcations, traps and hesitations that multiplied during the sensitive and intellectual development of the young artist: in particular this fundamental indecisiveness between an artistic career and a philosophical one, which would haunt him for a long time. Until the very end even, since among the items that would be found in his makeshift sailboat – before it vanished in turn, with the secrets of a disappearance that, to this day, has kept the fantasies of chroniclers alive – was Hegel’s famous and perilous Phenomenology of the Spirit.

Bas Jan Ader is not like other artists, in that he does not stand out from his fellow artists whose particularity is precisely to be singular… though Bas is perhaps a little more so than the others. Throughout his short career, he has strived to do the opposite of his peers. Already at school, he spent most of his time working relentlessly on a single sheet, on which he would draw and erase until the paper turned into an indecipherable palimpsest of traces and furrows left by the tip of the pencil, as the erasing gesture supplanted that of drawing. Quite the agenda! Which he would eventually apply it on a larger scale, if his ending is to be considered as simply the avatar of the erasing gesture.

Thomas Giraud’s book is not an attempt to understand what prompts an artist to embark on a risky adventure, such as crossing the Atlantic alone on a cockleshell – a thirteen-foot boat sailing among waves that can reach up to three times its length. Avec Bas Jan Ader does not claim to enter the artist’s thoughts either. The word “avec” [with] sets the tone for a book that tries to follow as closely as possible a path that began very early on, with a founding event that would leave a deep mark on the artist’s psyche. Was it really the early death of his father – shot by the Germans in the woods near the family home –, that determined his both unique and tragic destiny? A father who became a hero somewhat unwillingly, driven by what he considered to be the only thing to do in the tragic times of World War II and the hunt for the Jews: help them escape the horror. Bas would take the obvious route to a school of fine arts which he would never stop distancing himself from, hitting a road of tumbles and jumps in various canals and rivers, until his last “feat”, the details of which remain a mystery to this day.

Although academicism is precisely what every artist nowadays avoids like the plague, it was still sought after at the time when Bas Jan Ader briefly studied at the Academy of Fine Arts in Amsterdam. As he spent his days erasing his drawings, daydreaming and keeping to himself with an air of melancholy, the young artist saw himself donned a sudden aura setting him apart from a bunch of all too conformist students. This is enough to show that unconventional positions remained exceptional at the time. Bas more or less knew how to play with this attitude which radically singled him out, though it is not known whether the seductive act of this “melancholic fool”, as he performed it on his fellows, was enough to compensate for the disappointment he felt as he evolved in a world “much narrower than what [he had been] hoping for.” “There was no hero, at least in your eyes, not even a failed hero who carried within his soul the majestic ruins of a great shattered hope.”1 The ghost of the father haunted the troubled thoughts of a young student in search of an unreachable personality capable of transcending the insipidity of soporific teachings.

The father figure is recurrent in Thomas Giraud’s books: already in Élysée – which recounts the life of Élysée Reclus, the anarchist geographer – the father plays a fundamental role, a powerful anti-model that you have to stand up against to assert your identity. The mother is a guiding figure, much more understanding of her son’s desires than his father, who sees no other path for his offspring than the one he has chosen for him: the same as his. Élysée and Bas both have ministers for fathers; an authoritarian and uncompromising figure for the former, softer but strong enough to resist Nazi barbarism for the latter. The future geographer’s long walks through France seem to have given him a taste for sharp descriptions of landscapes, for lack of interest in religion. His erratic readings of the big names of German philosophers only emphasized the future artist’s hesitation as to his true professional motivations. Both books show the limits and obsolescence of the notion of vocation, which feels more connected, as it emerges, to the weight of an authoritative education and to the surrounding social pressure than to some sort of irrepressible out-of-the-blue injunction fallen from the sky. Bas’s vocation for the fine arts – had he ever had one – seems more accidental than driven by genuine inner necessity. He was feeling bored at the Amsterdam School of Fine Arts, in this small town whose limits he quickly became aware of: “It doesn’t take long to get to know Amsterdam. Even though it is the largest city that you have ever known, you too will soon know it by heart. Like everyone else, you will say that it’s tiny after a few weeks”2 – eventually hiding away in his room, where he knows that it would prevent him “from always going back to the same places, by the same canals, drinking the same beer and constantly bumping into the same people.”3

Rarely has the question of vocation and resulting destiny been approached with so much delicacy and care as in these two books by Thomas Giraud, and even more so in the latest one. If we are not dealing with a clinical study of someone’s psychology – which the author conscientiously avoids – the relation to the father is ever present in a book where pure fiction only steps in moments that have not been the subject of any archiving, photographic or otherwise. And for good reason: the author let himself be carried away by a current of hypotheses regarding activities the artist could very well have engaged in during his final journey – since Bas Jan Ader’s boat, the Ocean Wave, could never unveil the secrets that a contemporary scientific analysis would have. Just as mysteriously as its owner, the boat disappeared the day after its discovery off the coast of Galicia, probably stolen by some admirer, or as the author supposes, by some Iberian fisherman convinced that the Spanish-colored cockleshell had no other destination than the flotilla of fishing boats to which it should naturally belong…4

Thomas Giraud does not impose any reading for a final as extraordinary and legendary as that of Bas Jan Ader. The author simply fills in the blanks of a gap-fill biography by imagining which thoughts may have occupied the artist’s mind when he was alone in the middle of the ocean. Perhaps he was speculating on his chances of crossing the Atlantic, or perhaps his micro-Titanic was slowly sinking into the ogress like sea, having encountered no iceberg other than the slope of a scheduled disappearance…

The resolutely pioneering work of Bas Jan Ader remains perfectly relevant today. Beyond the romantic dimension that surrounds it, his practice is imbued with his determination to abandon all academicism as well as his concomitant refusal to produce any object whatsoever, visual or other, in order to devote himself primarily to performance practice, which became his trademark since his famous bicycle dive into the Amsterdam canals. The series of falls that he performed in the surroundings of the Batavian capital expresses the desire to sacrifice everything in the moment, to live to the fullest precisely when everything shifts, just before the inevitable fall – a moment the author has fathomed: “You are less interested in the final fall than the moment you lose your footing, the process, the transition from the top to the bottom… What matters is to show how someone falls, the way you go from losing balance to toppling over, those few grams that balance the whole body on a very fine line before dragging it, dragging you, now towards the ground.”5

Bas Jan Ader’s “falls”, however extraordinary they may be, were no exception in the second half of the 20th century. They seem to correspond to a strong tendency in the arts at the time that may have been initiated by Yves Klein, who was the first to take off in the air before falling back down even harder. But the fall of the man from Nice is not a real one. Klein’s famous leap in the so-called “angel” position was caught on camera, translating a movement that is somewhat rising rather than falling. Conversely, Bas’s falls bear witness to an inevitable coming closer to the ground. Besides, the Dutchman’s motivation was not about dreams of immateriality but rather the tribute he paid to gravity, which always brings us back to earth, or into a canal or river to absorb the shock with the surface.

It is more with American artists that Bas Jan Ader would later on be associated. We quickly understand that he did not stay forever in the Batavian capital, where his attempts – one can imagine – must have prompted misunderstanding and mockery more than genuine enthusiasm. He would therefore end up in California – the land of Chris Burden, Baldessari, Ger Van Elk, and an infinitely more energetic scene than the austere Netherlands’.6 But what characterizes the work of the Dutchman, unlike all of those fall enthusiasts, is that he seemed to slip down one single slope, which would lead him to his ultimate eclipse. Chris Burden, to name only the most famous among them, has repeatedly endangered his physical integrity – the fall representing but one type of threat to the latter among many others. Unlike this artist who liked sensationalism,7 Bas Jan Ader’s swerves took place in relative isolation. If no public was ever convened, care was still taken to document them by way of film or photographs “to move away from the brilliance of ephemeral reality, for the permanence of what’s impossible to reproduce, and for the depth of the blur” as Thomas Giraud puts it.8 Bas Jan Ader’s “last fall” – if it can be considered as such – was witnessed by such a reduced audience that we are still wondering if he really did disappear at sea…