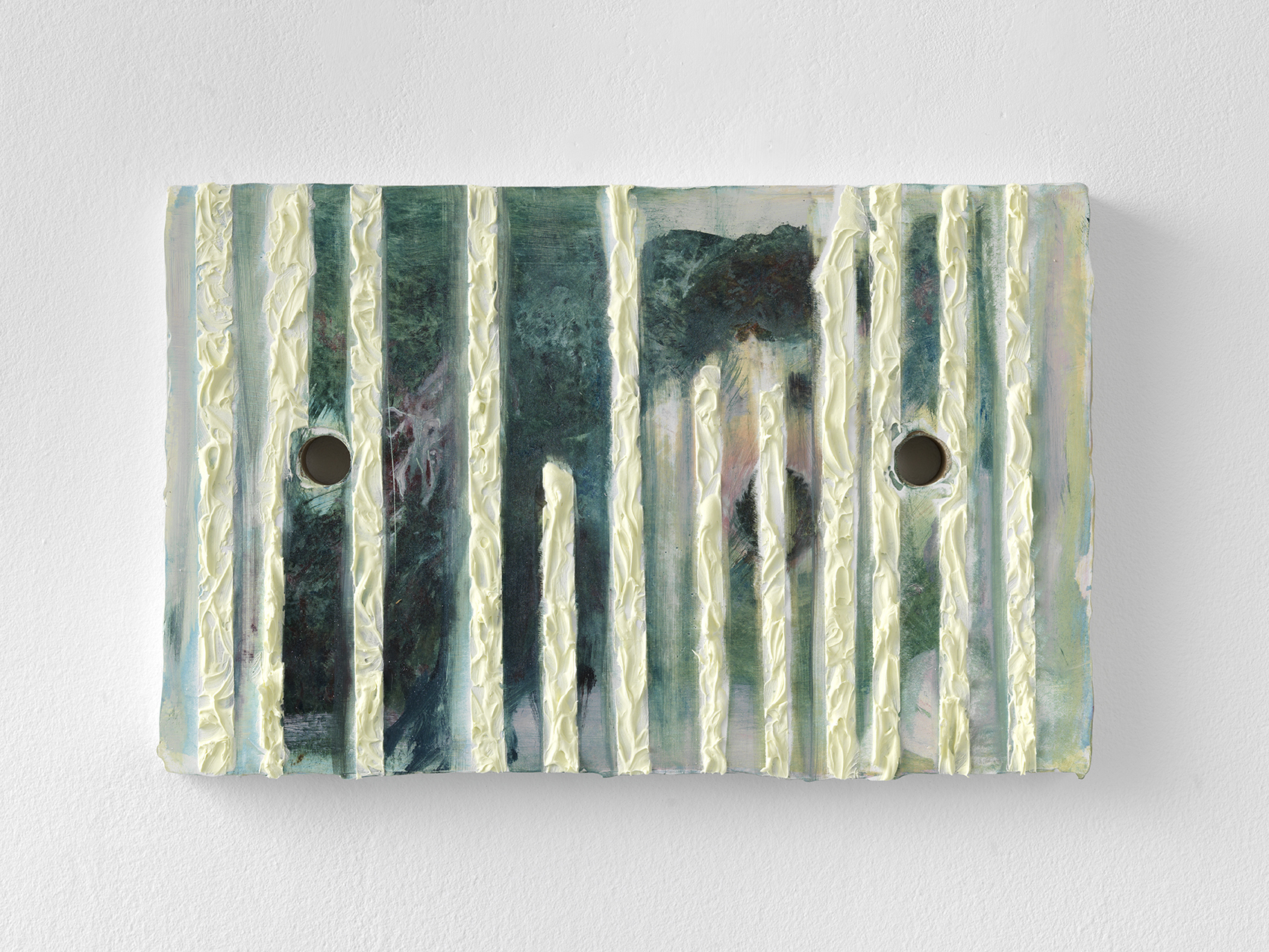 None of Nicolas Roggy’s paintings have titles. To be able to talk about them in their absence (meaning in any conversation not held in his studio in suburban Paris, or in one of his exhibitions, but elsewhere in space, on the telephone, in front of a pdf file, or on Skype), he has to describe them based either on a set of variable details and coordinates—their format (large or small), their colours, the complexity of their composition where relevant, and their thickness—or on a place where he has exhibited them. This produces such descriptions as: “the large pink painting like a folding screen, the largest one in the New York show”, “the spray painted ones at the Triple V gallery”, “the pink painting at the stand, the one which was the most mannered and the cheesiest”, “the one shaped like a suitcase which I made for Anton Kern”, and “the large green and red, the simplest”. He describes his paintings the way one describes a person whose name one does not know, in a form of anthropomorphism. “I often compare my paintings to masks”, he explains, “but it would be more to the point to say that they are close to the mask’s unity.”1

Nicolas Roggy has developed a manufacturing method (this is the word he himself uses: he “manufactures” paintings) which consists in adding more or less thick layers of gypsum, plaster, paint, silkscreened inks, or letraset to PVC and wooden surfaces which are at times flat, at others protruding from the wall). This added matter sometimes becomes unchecked (which gives rise to thick and very matierist paintings), while at others it is contained. The symmetry is more or less strict. The layers are applied, sanded in places, then more are added, and sanded again. The process is repeated. 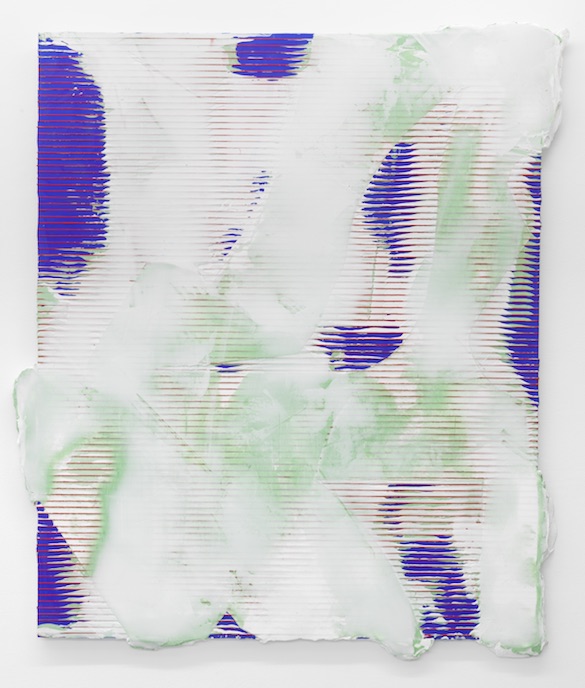 Nicolas Roggy is not one of those painters who explain their relation to the medium through the ever-changing repetition of one and the same motif (like Josh Smith and his thick-lipped fish). Each painting is based on a visual plan which is peculiar to it. It is the result of a manufacturing experiment which does not comply with any kind of systematism (what is more, the nature of the surfaces and media he uses changes). Its colours, its depth and its composition are ever-variable parameters, akin to the degree of confusion and hybridization. He also devises his exhibitions outside of any formula, and does not work in series. For the pieces which he produced for the Martos Gallery stand at the Independent art fair in Brussels in April 2016, he developed a principle which he describes as “hysterical”,2 with each piece being an asserted proposition, produced over a long period of time, and a possible direction for the painting fitting into a highly stage-designed whole. For his participation in the UNdocumenta festival at Gwangju in May 2016, he worked at greater speed, in a single evening and without too many details painting a set of black and very matierist pictures, which were then installed on previously prepared partitions. For the exhibition which the curator Bob Nickas is organizing this summer around some Jean Prouvé pieces, he has been working from shapes found in this latter’s œuvre. But this appropriation of forms taken from reality is more than rare in his works.

His works thus have something destabilizing about them, insomuch as they do not create any kind of habit in those looking at them. An idea of painting is developed in each instance, one possibility among billions of others takes shape in a proposal, which leads to a new experience, and a surprise. So we might start by saying that his paintings are all abstract, all very different, and all thoroughly autonomous. No title or discourse conspires to load them with any prior meaning whatsoever. What is more, the artist refuses to steer the way they are interpreted by means of overly didactic analyses (“the works always have a potential discourse, but I prefer not to reveal it, out of superstition, and because I’m afraid that the painting might then lose its autonomy.”)3 In this way, the discourse that he develops about them is not analytical, but tells us about the story and method of their manufacture, and describes the effects he uses (matt/glossy/metallic, the interplay with sculptural and architectural scales, and chromaticism) and his romance with materials. He invariably emphasizes his wish to leave viewers free to look at his works and understand them as they see fit. This is stylistically translated in the superposition of layers: it is often white that forms the final coat, a reversal of the traditional process which, eventually, offers onlookers an open projection area. He wants to manufacture paintings “which leave people alone”.4

So in his œuvre everyone sees what they want to see. It might be maintained, as Sharon Butler does, that Nicolas Roggy’s painting lends visibility to the ways we use the Internet5 (a nothing if not surprising analysis, and one which he formally refutes). Or that he is developing a body of work which reflects modern life, as might be suggested by the title of the exhibition “The Painter of Modern Life” organized in New York in Spring 2015 by the freelance American curator Bob Nickas, where Roggy showed several paintings.

So in the way in which we can look at an abstract painting by Christopher Wool as the realist depiction of New York in the 1980s and 1990s (Wool has incidentally been involved in a photographic project about New York), it is also possible to see Nicolas Roggy’s works as pictorial translations of the visual, physical and emotional experience, which, for him, consists in living and working today in northern Paris, between La Courneuve and Aubervilliers, in a suburban, chaotic and post-industrial Paris which is forever under construction (if most of his works are conceived for the white cube setting, he is also thinking these days of producing street paintings, paintings for the street). In his paintings we find signs referring to this urban environment: the pale green he so often uses thus evokes not only the colour of Paris’s metro but also that of fireproofed plasterboard, and, more generally, his colours share in common the fact that they are not colours of communication but those of road-signs and construction, with the day-glos and red referring to building sites and highways, and white and greyish hues to rendering and cement. Nicolas Roggy manufactures paintings. So the dust of streets, factories and worksites merges with the dust that he creates when he sands the surface of his paintings, dust which covers every nook and cranny of his studio. 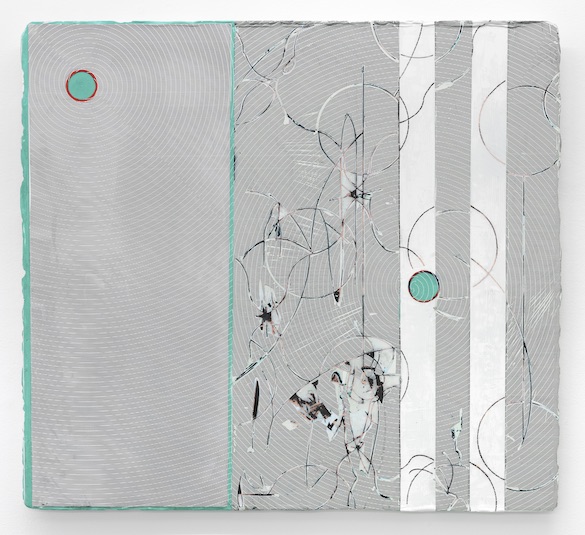 In his review of “The Painter of Modern Life”, the New York Times critic Ken Johnson seemed annoyed about the discrepancy between the show’s title and what he found in it: “Given its title, taken from an essay by Baudelaire, you might suppose that “The Painter of Modern Life” would offer an alternative to the abstract and conceptually self-reflexive approaches to painting that are so prevalent today”.6 He went on to describe the exhibition as “lively and engaging”, but he was at pains to disguise the fact that he left unsatisfied. “it doesn’t have a lot to do with life as ordinarily construed”. Read: none of the 70 works on view in the show had handed Ken Johnson, lock, stock and barrel, the secrets of modern life in the manner of the subjects covered by the new French highway code exam (implying: Oh no, more deconstructed abstraction! Quick, an image of figurative painting by way of illustration!).

But what if we reckoned that the exhibition’s title did keep its promises? And that paintings which focus, like Nicolas Roggy’s, on “formal and procedural aspects like surfaces, shapes, repetition, color and sensually assertive materials ”7 are just as apt as a photograph depicting police violence against students, or a video montage of images found on the web, when it comes to conveying modern life? “All contemporary art, then, with no reliable guarantors for posterity, is in a sense pre-historic”, Nickas explains. “Let the works, one at a time, convince you that this visual realm remains a compelling place to explore, and that picture-making can’t help but define our time. After all, the artists are both observers of and re-makers of reality”.8

Another possible interpretation, quite akin to this realistic hypothesis, is that of the artist’s gallerist, Vincent Pécoil, who sees in Nicolas Roggy’s work “an abstract allegory: a blurred and distorted image of the confusion of the world about us”.9 And in fact his paintings display a familiar disorder, contrasts between contradictory formal and conceptual principles, depth and flatness, geometry and accident, the mechanical and the gestural, construction and destruction, refinement and roughness, and even the popular and the scholarly (Roggy quoting, in reference to one of his latest paintings, a Paul Thek work and Erté illustrations, this latter having produced, in the 1930s, precious theatrical costumes and ballet sets). This is one of the lessons to be learnt from Nicolas Roggy’s painting, which re-asserts that the purest pictorial abstraction can, it just so happens, visually transcribe our everyday experiences. Not only because it borrows its abstraction form the world roundabout (the world of finance, of architectural forms, of social relations, and data flows) but also because, using the means of painting, it presents a muddle between contradictory principles and aspirations which we are forever trying our hand at—a muddle which is first and foremost mental. In this sense, Nicolas Roggy’s painting is expressive, if not Expressionist. 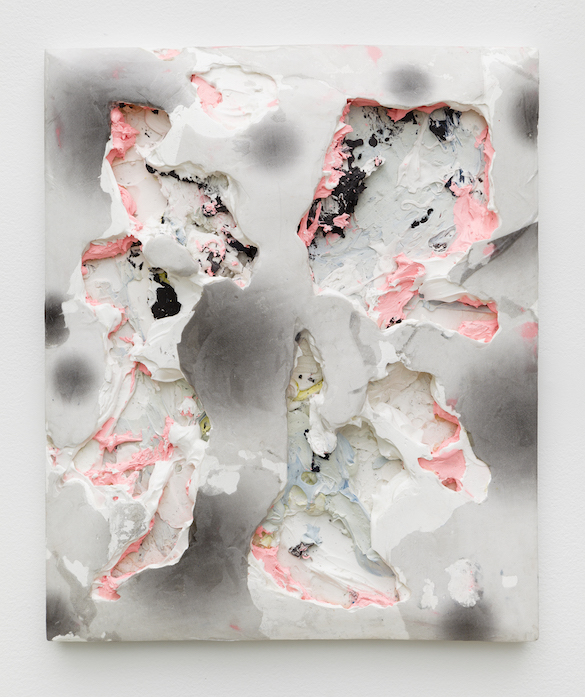 One feature of his work which has attracted little comment to date is the powerful link it has with drawing, collage and assemblage. This production stage was already present when he was a student at the Nantes School of Fine Arts (along with We are the Painters, and Florian and Michael Quistrebert, with whose painting his own is often compared, even though their respective challenges differ greatly, for they are far more process-oriented in Roggy’s œuvre). At that time he was making collages based on supermarket prospectuses, and producing sculptures using bits of pianos found in garbage dumps, painted and put together. “For some painting, I draw”, he explains today. “I make a sketch on which I glue patterns, which I then reproduce on a large scale. The highly constructed pictures are first of all made like drawings. But not in a systematic way.”10 The degree of resemblance between the drawing on paper and the picture is, moreover, quite unsettling (which runs counter to the idea that he might produce a thoroughly off-the-cuff painting; what is more, the drawing develops as he produces the painting, with the painting). He also draws from a personal image bank, which encompasses old plates depicting alchemy, illustrations, decorative things, and furniture. “I print sheets of paper, and I overlay them on each other. I focus on one element of the image, which I enlarge. I play with parts of things, mixed with parts of costumes, patterns, and sometimes even works.”11 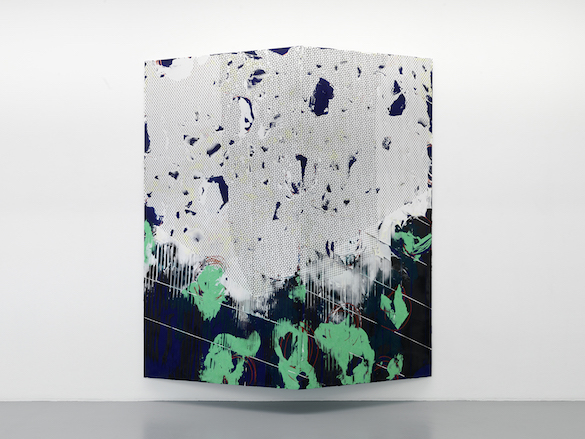 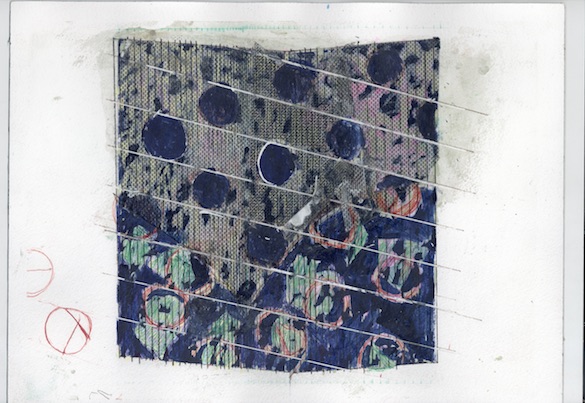 These drawings are never shown. Most of them have been given away, or are lost and invisible. But they say something about the nature of the artist’s work. Like a collage which can incorporate its component elements in a larger order, or, conversely, proudly display the eclectic dimension of these elements, each one of Nicolas Roggy’s paintings offers us a tranquil image of disorder.