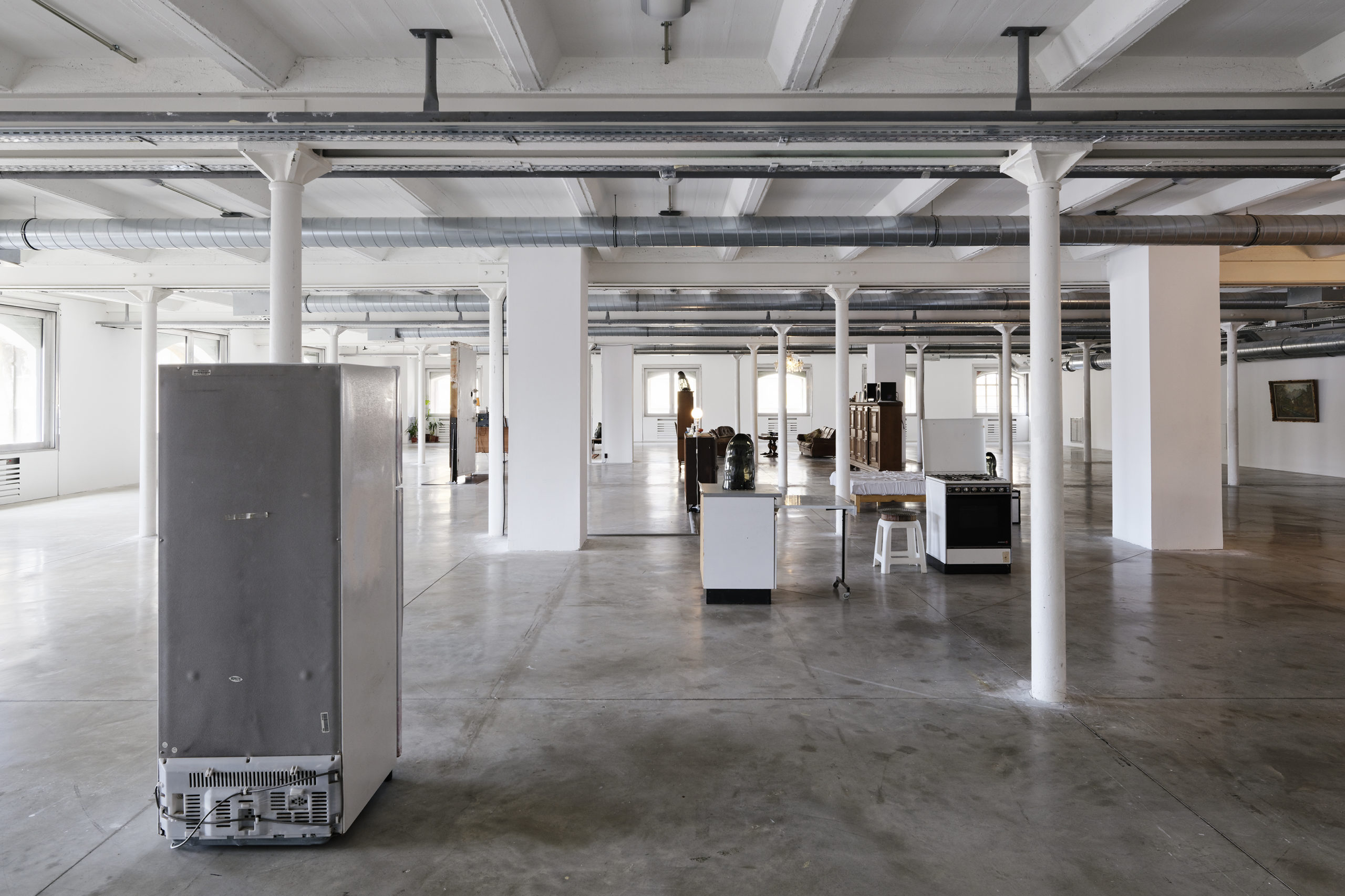 On the Boulevard Moustapha Benboulaid in Algiers, an apartment emptied of its contents– both bodies and objects– bears a new door. The original stands today in Lydia Ourahmane’s (born 1992 in Saïda, Algeria) solo exhibition Barzakh presented at Triangle – Astérides in Marseille, after its first presentation at the Kunsthalle Basel. Ripped from its architecture and, in turn, renounced of its original protective function, this door is the embodiment not only of the exposure of the artist behind this gesture– as her personal belongings and those of the previous deceased occupant amongst which Ourahmane carefully inhabited the space are on display– but also of constraining cultural and administrative values. Symbolizing the weight of inherited histories that the artist confronts through her practice, an installation brings together these two doors; the original one from the 1901 Haussmannian building to which it belonged, and a second one, made of metal, added during the paranoia of the black decade in Algeria (which Ourahmane and her family fled to live between the UK and Spain). The ensemble stands as a non-functional threshold.

Although undeniably a domestic landscape, domesticity is not in question here. It is rather a lens through which the artist reveals personal, socio-political and postcolonial traumas, and the systems that perpetuate them. The propelling force behind the exhibition was the artist’s longing to understand the concept of “home” as she found herself in Europe not able to return to Algeria during the pandemic. Yet, what nevertheless followed was an emotional experience entangled with administration that rendered the physical manifestation of the “home” secondary. In this sense, the “home” present can be considered as the oikos, an ancient Greek term that simultaneously refers to the physical layout of a home, its economy, and the beings that occupies it. Thus, a complex landscape in which emotion and jurisdiction intertwine. Lydia Ourahmane’s investigation into such systems crystallizes in how they are expressed in corporeal realities– whether that be an apartment, a governing body, or the physical body, often that of the artist herself.

For Barzahk to be conceived, each of these bodies had to enter into an exchange of negotiation, patience and perseverance. A simple blueprint of the apartment drawn by the artist in one of her notebooks in 2019– the artist already in negotiation with what that space represented– was perhaps the catalyst behind the idea to send all of the contents of the apartment resulting in the mobilisation of both people and objects. Ourahmane herself in France at the time, she relied on the Myriam Amroun and Khaled Bouzidi of rhizome (an independent art gallery and organization, Algiers) to face the Ministry of Culture of Algeria. They eventually succeeded in creating a new category of what an art-object could be (in this case, an installation, in the sense of the “ready-made”), assuring that this “object” could now temporarily leave Algiers for exhibition purposes, and finally wrapping, packing, extracting and shipping everything– from trinkets and used beauty products, to appliances, furniture, and the door– to Marseille, then Basel, then back to Marseille, before its obligatory return to Algiers. Thus, the initial desire for understanding “home” evolved into the categorization and sterilization of the intimate in order to push for the movement of objects across borders when bodies were not able to do so. It is not a reconstruction that gives way to artifice and formalises nostalgia, but rather an unlearning of societal notions of the home through undoing, un-naming. Indeed, the artist says she had never felt more at home than on countless FaceTime calls made throughout the process, detaching this notion of home from a physical space. Today, she can’t even bring herself to borrow her own books from the exhibition, making feel like a thief in her own home, as the simultaneous dismantling and opening of the space has displaced the status of the personal. 1

Displacement, extraction, expulsion– gestures intended to erase are reappropriated by the artist in an act of what philosopher Elsa Dorlin theorises as negative care.2 Dorlin states that negative care is the permanent effort to understand the other as well as possible in order to defend oneself, a constant effort for those dominated to react in the face of the dominant rather than recoil.3 Ourahmane’s approach is similar in that her perseverance allows for an inversion of negativity into a form of care that facilitates change and letting go. The Third Choir (2014) exemplifies this tenacity and resolve through yet another displacement of objects. Realised for the artist’s degree show at Goldsmiths in London and later exhibited in Palermo during Manifesta 12 (2018), this work is a sound installation comprised of twenty Natfal oil barrels exported from Algeria, each containing mobile phones turned radio transmitters. The 934 documents illustrating the artist’s correspondence with the government to export these barrels, a painting commissioned by BP to finance the project, and the endless negotiations behind this seemingly impossible feat, made The Third Choir the first work of art to be legally exported from Algeria since its liberation from France in 1962, rewriting export legislation that had been put in place to protect culture. Putting herself into a compromised position throughout the process– particularly as a young, single woman from a Christian family in face of Algerian authorities attempting to export contentious objects– Lydia Ourahmane nevertheless reflects on this disadvantageous operation positively, “It’s surprising to consider empathy or humanity as being miraculous conditions in the airtight world of bureaucracy and administration […] Encountering someone in a position of power who actually wants to help signifies that there might still be some hope. That we are not entirely disabled, motorized and operating at the disservice of each other. And we need to keep fighting for this kind of space.”4

Displacement, extraction, expulsion– gestures that lead to absence, an absence that runs through the artist’s practice. In the work Boudjima (2021), presented at Triangle – Astérides in the group exhibition En attendant Omar Gatlato: Regard sur l’art en Algérie et dans sa diaspora curated by Natasha Marie Llorens in the spring of 2021, two metal chains attached to dog collars laid on the floor. Next to the objects, a video of the dogs who once adorned these collars run freely through a field in Algeria. These dogs bore witness to military forces sealing the door of the artist’s family home once used as a place of worship for Christians in Algeria to congregate as the freedom of religion had been made legal in 2006, later outlawed in 2017. The absence of bodies represented through the collars remind of the inaccessible house, and reflect the artist’s negotiation with the violent processes of being pushed out of a physical space. This absence, or rather suspension, is indeed present again in Barzakh as the title itself implies: in Arabic, it refers to a liminal, in-between state, that can relate to a space where a spirit awaits, between life and death, a physical space, as well as a place of judgement.

Ourahmane’s process of making art is a form of emotional, spiritual and physical labour that is necessarily relational. And in relational practices, the body is at work, even if, at times, absent. “My work is a lifeline. And so, my body becomes the site.”5 In the Absence of our Mothers (2018) is the climax of body-as-site in the artist’s practice. A melted down gold chain purchased by Ourahmane from a stranger at the same price of a boat trip to flee to Europe meets the story of the artist’s grandfather who extracted his own teeth to be discharged from the military: two separate narratives of escape that take shape in a gold tooth implanted in the artist’s mouth. Not a masochistic gesture to inflict pain on oneself, but rather a way of understanding trauma and dealing with it. “I would suffer if I didn’t do the work I do,” the artist states.6 Droit du sang (Blood Right) (2018), continues in the same vein, as it is a work documenting the process of claiming French citizenship, revealing the absurdity in the power that bureaucratic procedures have on individual identities. In these works, forms of negative care and material affect give a corporeal reality to histories of emigration and resistance.

From the body comes the question of surveillance, and how we are made aware of our movements in space, voluntarily or not. Because surveillance is a common theme in the artist’s practice, one that takes on two separate forms in Barzahk. On one hand, the blown glass sculptures that sit atop various pieces of furniture in the exhibition veil, but do not hide, bugging devices that are each assigned a telephone number, allowing anyone to tap into the exhibition and listen to what is taking place inside at all times. On the other, a laser beam (Eye, 2021) cuts through the exhibition space, projecting information collected from the outdoors (through a system of mirrors) into the exhibition. Once the laser beam is obstructed by the body of the viewer, the live transmission of the sound stops, or shifts. Each of these objects makes the viewer highly aware of their behaviour in the space, perhaps influencing the way that they carry themselves. These surveillance devices function as reminders that not all domestic spaces are “homes”, spaces of safety and comfort, but rather, for some, sites of violence, fear and paranoia.

When discussing Live Call (2019)– another work of surveillance and self-exposure for which the artist bugged her own cell phone allowing those experiencing the artwork to listen to the artist’s every move and conversation throughout the duration of the exhibition– Ourhamane explains that she “experiments with a kind of chaos that seems closer to the truth.”7 This statement is reminiscent of a text found in Sophie Al Maria’s book Sad Sack: Collected Writings that sits silently on her desk in Barzahk, awaiting its return to Algiers. “Swallowed by the chaos she once wore like a crown […] And [yet] she will continue to dance until you see her. Until you believe in her. Until you listen to her. Until you listen – to what she really means.”8 In the face of administrative hells and trauma, Lydia Ourahmane tirelessly makes the seemingly impossible possible, pushing through chaos and retention to arrive at a form of care. A body of work that is indeed based on deeply personal experiences, but points to the dark realities we inherit collectively and proposes a singular way of how to process them.