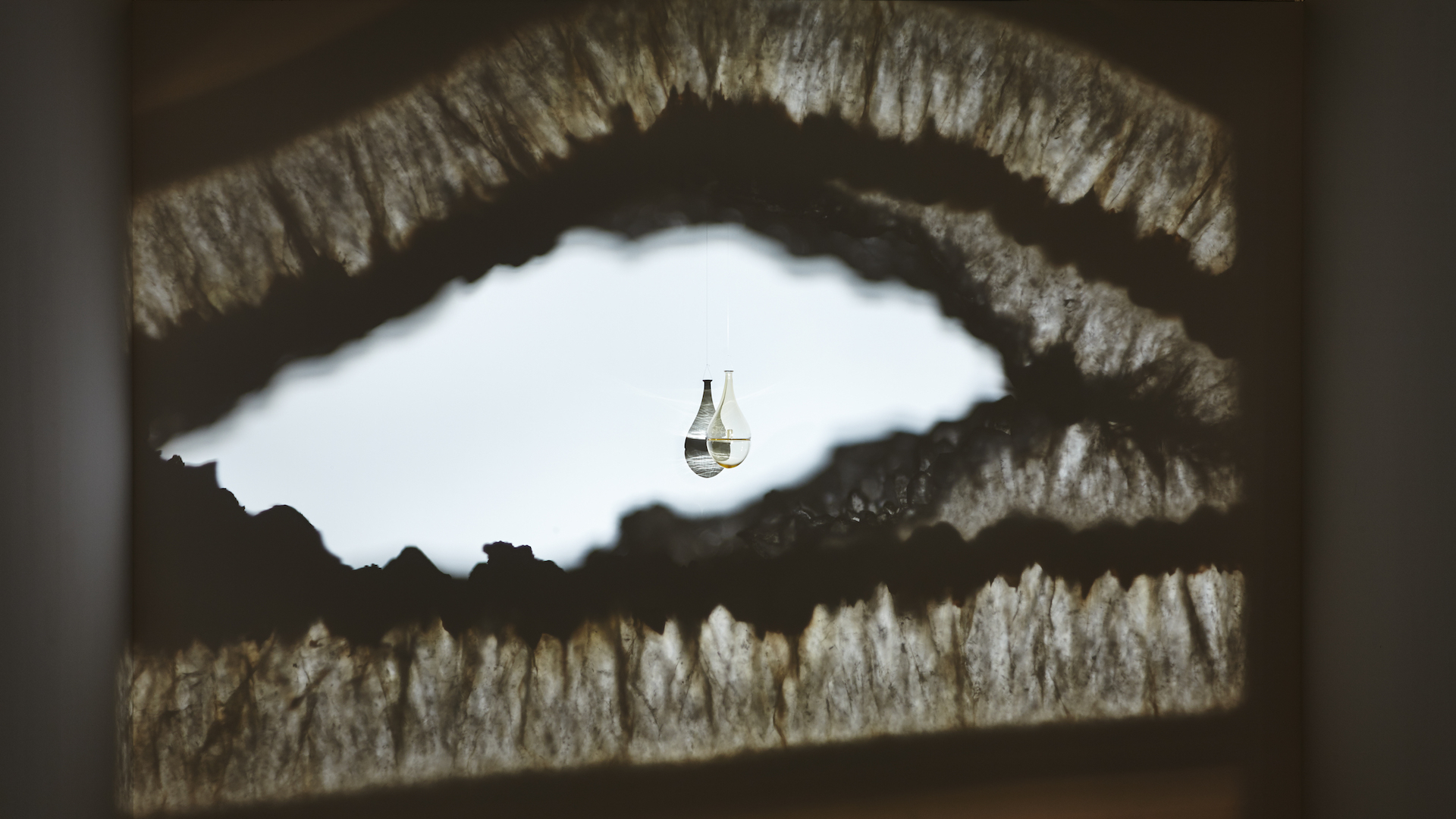 Detailed Narratives of the Ineffable

Few artists, these days, are developing a world as complex and fascinating as Francisco Tropa’s. As an all-round artist and technical and conceptual virtuoso, he is forever annexing and associating distant fields from the history of forms, and which go well beyond the challenges of art to embrace a seemingly limitless cultural arena. Mixing sculpture, engraving and printing, drawing, photography, and performance, his exhibitions brim with precious and precise forms, often re-adapted, which end up by creating a system. The Portuguese artist drew attention to himself when he represented his country at the 2011 Venice Biennale. In the darkness of an old downtown warehouse, a strange laboratory of optical experiments contained several magic lanterns projecting enlargements of real objects and forms of matter onto the walls: dead insects, a drop of water, a grain of sand. These crafted machines, made with obsessive precision, resulted from a rudimentary cinematographic procedure, somewhere between microscope, X-ray, and shadow theatre, which called to mind Plato’s cave and its challenges in terms of representation. An irresolute atmosphere somewhere between fantasy and science which offered the work’s essential clues, a subtle line of thinking about reality and illusion, summoning those moments of history where knowledge and magic were but one. This intriguing pavilion nevertheless hid a much larger work, which the artist had been developing since the 1990s. 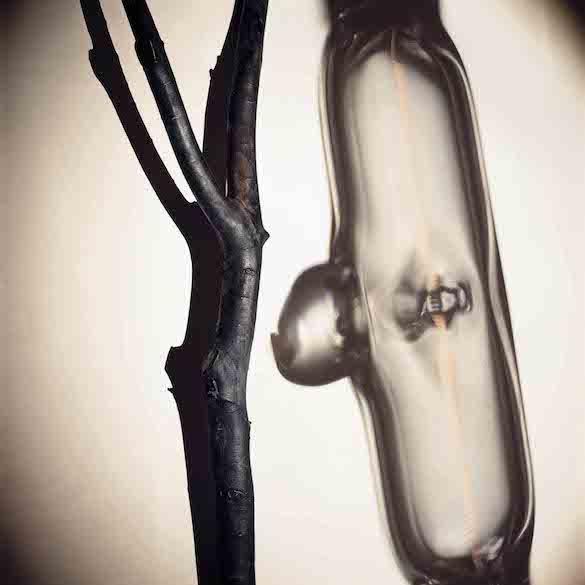 The work is in fact underpinned by a whole cosmogony: a great fictional narrative, revealed in episodes and organized as bodies of works. His exhibitions work like subparts of programmes spanning several years. They respond to one another, recycling existing pieces in updated narrative systems. The latest of these major projects, titled “TSAE (Trésors Submergés de l’Ancienne Egypte)” broaches, beneath its very hackneyed 19th century title of a tale of adventure, neither more nor less than the forms of representation of the world in the course of history, from Antiquity to modernism by way of the Middle Ages. To do this, the artist freely handles hybrid references, borrowing from engineering (mathematical objects, precision mechanics), as well as from mysticism (the divination of games of chance) to Plato’s Solids as signs of symbolic liaisons between the organization of the world and some geometric forms). Materially speaking, the work draws from mineral as well as industrial worlds, involving a kind of minimal sculpture laden with spirituality, building unlikely bridges between Franz Erhard Walther and Joseph Cornell, Jean-Luc Moulène and Donald Judd, Anne and Patrick Poirier and Marcel Duchamp.

The artist’s recent show in the Sérignan Contemporary Art Museum (MRAC)1, titled “TSAE (Trésors Submergés de l’Ancienne Egypte)–ministère des affaires étrangères” winds up the above-mentioned cycle. This opus, whose previous stages took place at La Verrière in Brussels2 and at the Branco Pavilion in the Lisbon museum3 is the largest of all and proceeds by addition. In Brussels, the exhibition unfolded from a narrative base apparently simple: a fictional and “deterritorialized” archaeological dig, in whose scattered traces people tread. 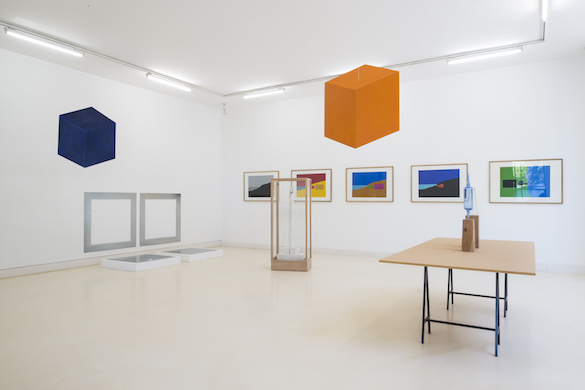 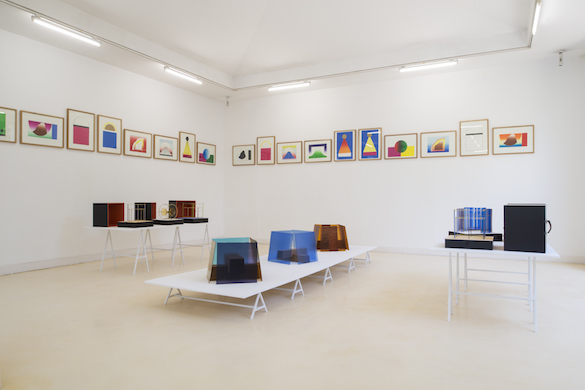 From this angle, the show was conceptually structured around three rooms representing as many chapters in the project: “Partie submergée” [Submerged Part], “Chambre violée” [Desecrated Room] and “Terra Platònica”. Three spaces, mental rather than physical, exploded in the space of La Verrière, which arrayed the works in a generous manner: silkscreen works on the wall, glass and wood objects on tables, glass and metal sculptures removed from their boxes, minimal cast bronzes, etc. Encompassing different bodies of the work, the whole summoned up several types of representations of the world, from the mediaeval “Christian topography” of someone like Cosmas Indicopleustes to the modernist utopias of someone like Paul Scheerbart.

In the entrance of the MRAC, silkscreen works recall the diagrammatic plan of the supposed site and its three basic spaces, each one with its own attributes and thus its specific objects. Sérignan’s show sees the addition of the “Puits”[Well], a new space embedded in the stone, the focus of the show and the pretext for a display of new works. This new chapter, which is less directly archaeological than the previous ones, is seductive in more than one way. The symmetrical architecture which causes the pillars to disappear, creates disturbing viewpoints and a significant dialogue between the works. The diversity of the materials (sand, marble, stone, wood, bronze), and the quality of the way the works are made confirm Francisco Tropa as a brilliant jack-of-all-trades, practicing a kind of state-of-the-art craftsmanship at the service of mystery. 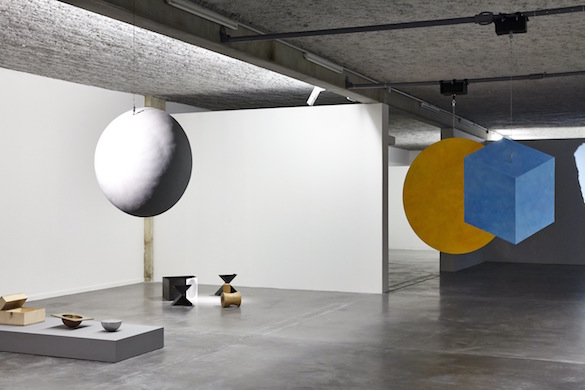 Overall and in the detail, the works are beautiful while preserving an extremely strange quality. The central series of the “Antipodes” displays a host of sculptural objects, precisely arranged in space, which seem to have to do with an archetypal or prototypal function, unless they are games. In a distorted dialectical logic, they are presented in twos, like more or less complementary false twins. So it is with these solid wood cubes, kinds of simplified puzzles presented open, whose inside is cut up in different ways. Their surface isomorphy hides a structural polymorphy. Elsewhere, it is differences of materials which create the tension. Under the title Le Songe de Scipion [Scipio’s Dream], large monochrome mobiles appear as flat forms which assume volume as they spin on their own axis. Produced during a residency at the Calder Studio4 this year, these sculptural modellings of a geometry in space play with a kinetic effect that is as rudimentary as it is effective. On a large square of blue fabric, found materials (stone and wood) are set side by side with their double in bronze as if on a game board with non-explicit rules, while around it, an abstract image of the well gradually appears in twelve framed silkscreen works. Elsewhere, in a Plexiglas cube hanging from the ceiling an old monitor in pieces broadcasts a 1963 documentary film, showing an Amerindian building a wooden box with no screws. The ethnographical readymade creates an aesthetic confusion between Minimal Art and vernacular know-how. With the piece’s title L’Influence américaine [American Influence] playing subtly with these two references. 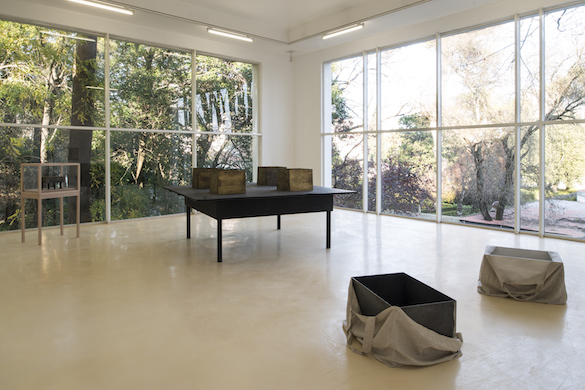 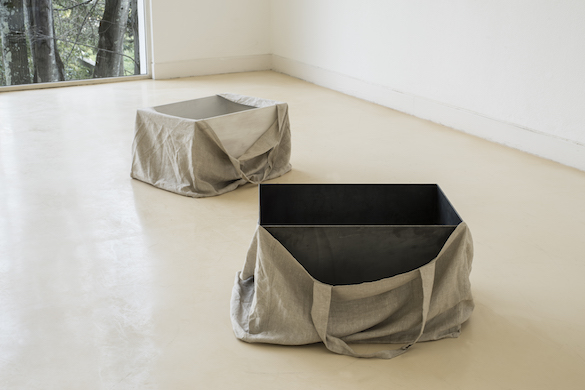 Overall, the whole exhibition incidentally operates by way of double meanings and illusory games. A reign of pretense which disturbs the rigorous making of the material productions.   The exhibition, which is very orderly at first sight, disturbs your sensibility as soon as you look intensely at it. A fine blade of agate inserted into a slide projector forms a translucent crevice, but also, from a certain viewpoint, an eye. Elsewhere, the circular mobile becomes a moon which becomes a sphere. These uncertain shifts are not just visual, they are also cognitive. What exactly are we looking at? Found objects, documents, raw materials, or cult objects? Engineering or craftsmanship? Art or archaeology? In blurring the boundaries between the figurative and the abstract, Francisco Tropa’s œuvre maintains an indecision about the deep-seated nature of the objects. In so doing, his narrative also works by trompe-l’œil. In Tropa’s work there is a touch of mischief, in the way he is forever dodging his narrative, playing with losing the visitor in successive layers of forms and narratives. At the very start, the show’s title plays deceptively with a popular imagination, because Egypt will never be mentionned. What is more, if there are many references—from Plato to Dante, and from Cicero to Minimal Art—nothing you see tallies exactly with what is mentioned. As with Duchamp, the names also play on chance, homonymy and phonetic coincidences creating a desirous gap between words and things. And it is precisely in these irreducible interstices between signified and signifier, creating intense areas of affective and cognitive activity that Francisco Tropa’s talent is revealed.

In fact, we never know whether the forms precede the narrative or vice versa. We never know what stems from intention and what from intuition. Both in the same movement, probably.  An immediate and non-hierarchic totality of forms and ideas, where, like the artist himself perhaps, we agree to grasp just a part. No matter: this cognitive precipitate incarnated in the matter, which is more iconographical than narrative, stems in fact from poetry. It is precisely here that the artist paradoxically turns out to be most contemporary, in his way of reinterpreting certain major narratives of the world in a way that is more sensual than erudite, addressing mystery by mystery, in detailed and documented narratives of the ineffable. A sort of knowledge embodied in form, nurtured by dream rather than analysis. 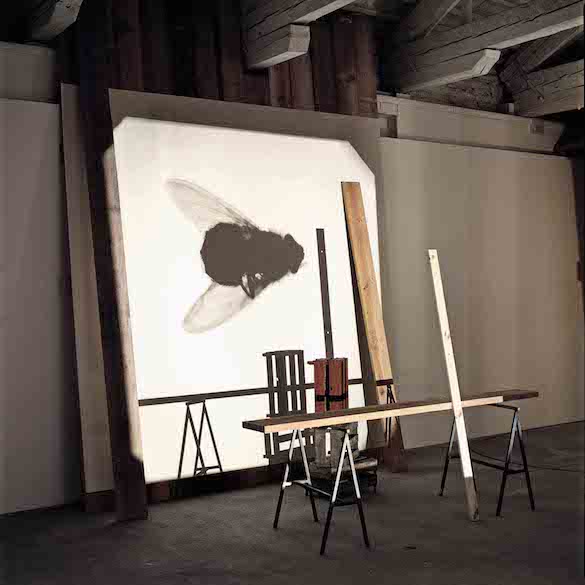 The resulting explosion of meanings does not hamper the recurrence of certain motifs. If the references to death are especially present in the show in Sérignan, it is the exhibition of an interior of things which is at work, in a discreetly indecent way. An organic connection with Minimal Art displaying confused relations between surfaces and depths. From the electronic intestines of a cathode tube to the entrails of a tree trunk, from the interior of the earth (the cave, the Well) to the inner structures of construction games, it is a principle of absorption, of elements tightly fitted into each other, that we find even in the ubiquitous motif of the box. This latter refers to a disturbing morbidity (the coffin), but it is also an organic reference: from the skull to the rib cage, bodily architectures enclosing organs that fit into each other. In a more profound way, just as the issue of space is not conceived in classical terms of expanse but as the coexistence of territories contained within each other (concealed rooms and inner passages), time, in Francisco Tropa’s work, is a time that is rolled up, and folded in on itself. A relation to history which is akin less to a linear chronology than to a cross-section, like these sawn tree trunks where circular traces of very remote periods rub shoulders on one and the same plane.

This complexity of detail and ensemble, focusing on an occult universality of signs, paradoxically underwrites the very graspable character of Francisco Tropa’s work. It can be appropriated in the sense that it is not a matter of understanding, but of feeling. Let us wager that here there is no hidden meaning which would split viewers between “those in the know”  and the rest. Or, conversely, let us reckon that all the meanings are hidden, transforming the works into surfaces where desires are projected. A cognitively democratic position which prefers a distribution of the sensible to the unilateral diffusion of an area of knowledge. 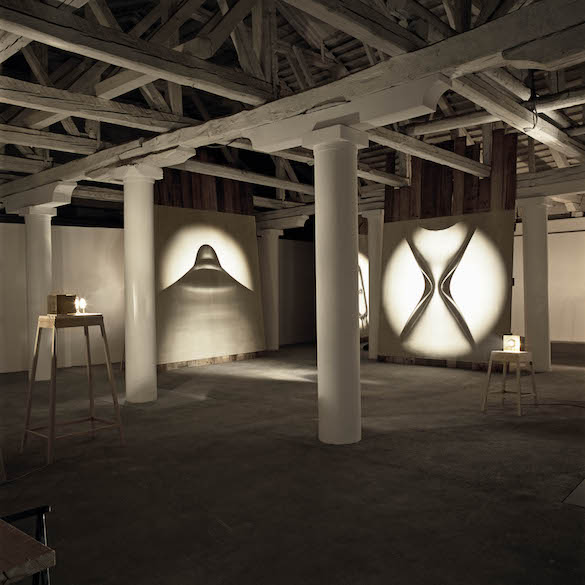 4 The Atelier Calder is an international residency located in Alexander Calder’s studio and home in Saché (France), designed by the artist himself. Francisco Tropa stayed there from March to May 2015.