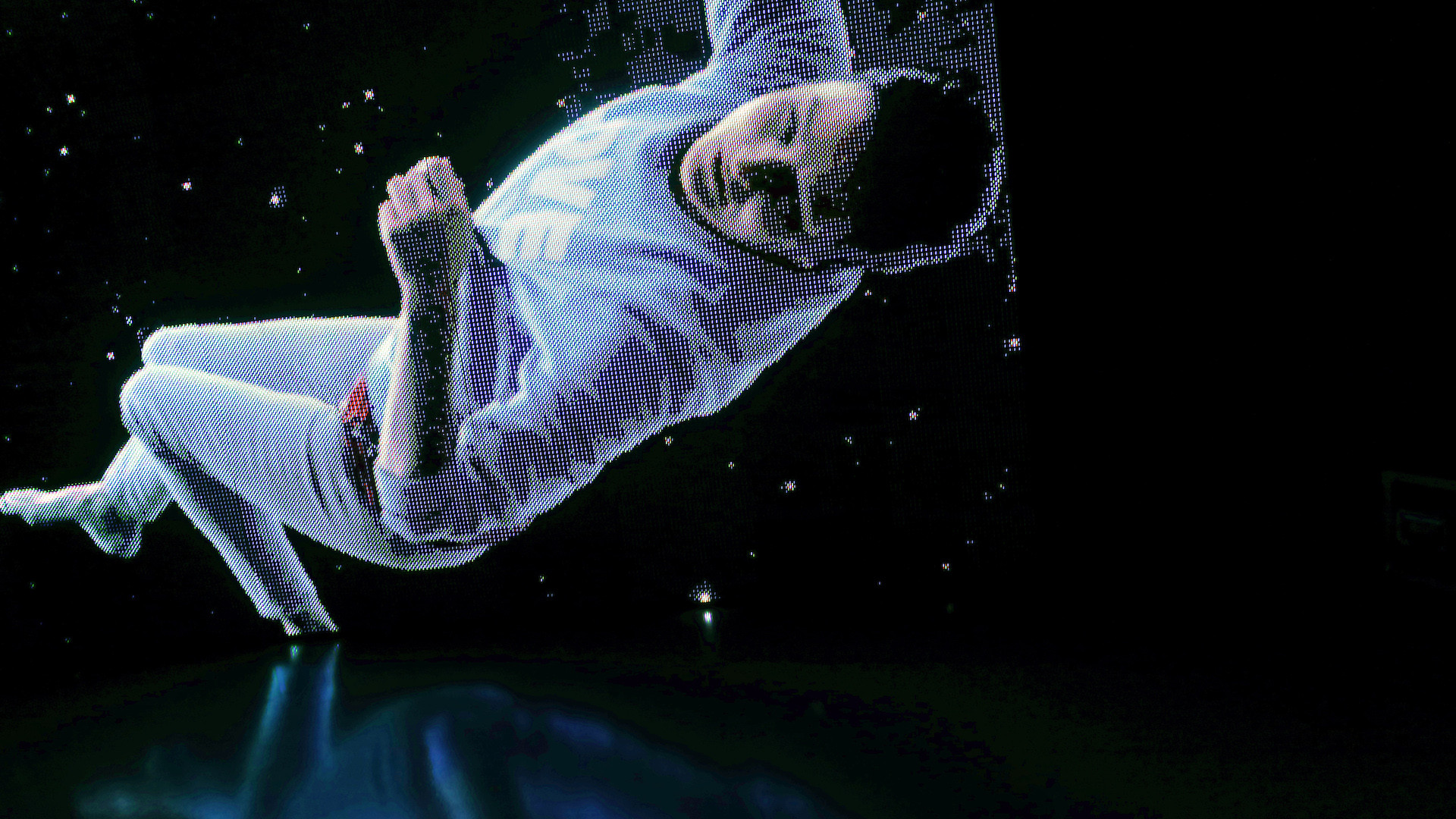 The M Museum in Louvain (Belgium) is holding a major show of the work of the Finnish artist Eija-Liisa Ahtila. Her latest installation, Potentiality for Love, involves new angles on an œuvre that is engaged in the exploration of forms of oppression and that is ground-breaking in relation to multi-screen film language.

In her early works, Eija-Liisa Ahtila filmed women suffocated by social and family codes, in psychically troubled states. Those characters lived under the pressure of other people’s eyes; their mental boundaries spilled over onto the outside world and invaded their perception of the daily round. The multi-screen editing extends that relation between inside and out, the narrative arrangements come to terms with the difference between the two, and create the inter-image, and tension between fiction and real space. What is enacted in the scenario is carried on in the viewer’s perception, placed as they are in the centre of the installation, but in a moveable position, because the interpretation schemes and viewpoints are multiple. As heirs to the narrative theories of the 1960s, and both New Wave films and ‘cultural studies’, Eija-Liisa Ahtila’s installations question the ways in which individual and collective narratives are constructed within divisive and dominant societies. The protective space of one’s own home is the place of social oppression, and everyday neuroses cause the fragile balance of the architectures of privacy to teeter. In The Wind (2002), the tale of a young woman’s mental suffering, and her sense of insecurity and loss of landmarks gives rise to a break in the order of things: walls quiver, shelves topple, and the wind rowdily blows into the interior. The vision of reality is re-orchestrated based on a subject in crisis who witnesses a collapse of her surroundings without even being surprised. The procedure of contagion of the outside by the inside has often been explored by literature but, here, the real space of the museum is introduced into the fiction: the narrative which is split across four separate screens keeps the architectural context and the images together. The space is not treated like a white cube or a black box, the walls are painted red, and some of the windows stay open on to the city, creating reverse shots and phenomena of porousness emphasized by the luminous atmospheres. 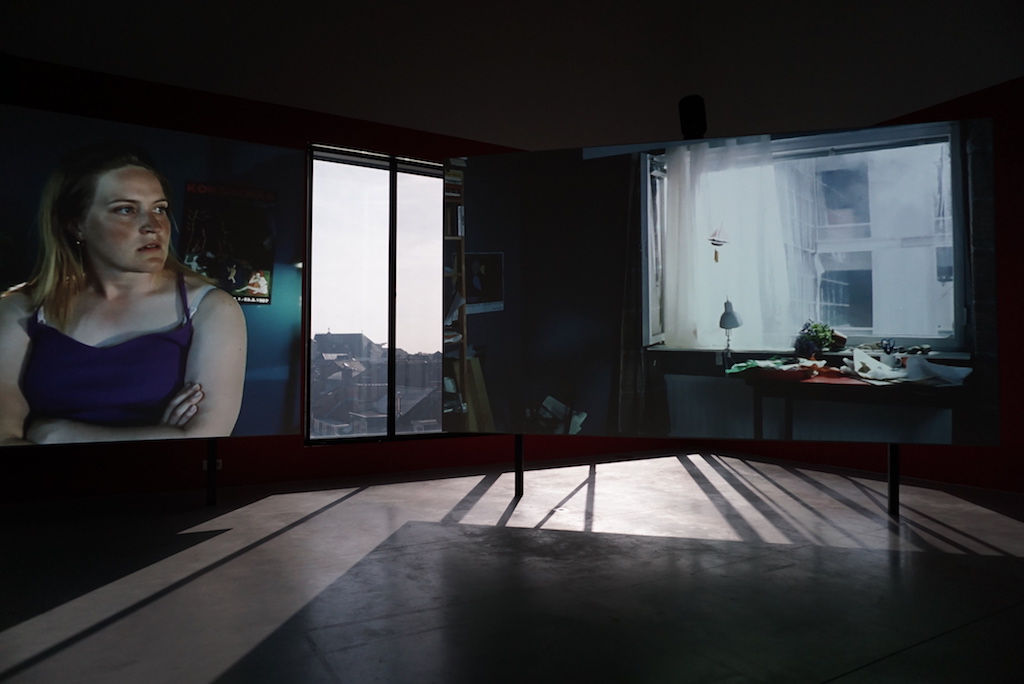 Eija-Liisa Ahtila devises video installations as complex environments anchored in the spectator’s consciousness and body, making a break with the unambiguous and fixed construction of classical perspective, but without denying its challenge, either. In their closeness to the feeling body, expressing the relation between the perceived and the constructed, Eija-Liisa Ahtila’s works film nature, forests and the wind, and birdsong, but also the city’s noises: the fragmented reality of our experiences which we nevertheless manage, at every moment, to reorganize as units of the self. The arrangements of the installations are like so many situations inviting us to look at ourselves looking, and question this phenomenon of unifying the perceptible based on the smithereening peculiar to the human condition. At the M Museum it is possible to have experiences of endless duplication—mise en abyme—and self-reflection developed in poetic and political narratives, and also playing a lot with humour. Studies on the Ecology of Drama (2014), focusing on the figure of the Finnish actress Kati Outinen, with whom the artist has worked on several occasions, thus questions the anthropocentric dimension of film. In the forest, the actress proposes several exercises showing the relation of the camera to the body’s movement, for example by facing away from the camera to prove the supremacy of the face in an image. The four screens show different viewpoints at the moment of filming, introducing what is off-screen, like the presence of the vegetal in relation to that of the human, precisely to try and offset the importance assumed by the body as soon as it enters the frame. The actress’s line of thinking is extremely interesting, because it raises philosophical issues of animality, currently the subject of much discussion, which lie at the centre of the artist’s later works: the possibility of upsetting schemes of perception.

Eija-Liisa Ahtila’s latest works effect a tipping, begun with Horizontal (2011), an impressive arrangement introducing into the museum the image of a very tall fir tree filmed in a forest which the artist knows well. A series of drawings on view in a room just before we come upon this tree, made like a study, highlights the spectator’s position by the inclusion of mirrors in the drawings, and pinpoints the wit of the endeavour, which has nothing to do with any all-encompassing approach. Six projectors are required, but, unlike spectacular effects, the aim is not to draw up the image height-wise: tipped horizontal, the fir tree is no less impressive. The perception of the tree is non-human, but also impossible to obtain with a single camera; by enlarging the field to contain the tree in its entirety, a whole landscape would enter the image. The unity of this vision is thus a composition of different parts but, unlike the multi-screen installations, there are no gaps between the images. The horizontality creates an impression of unity and continuity, while at the same time neutralizing that of domination, for, here, the image is not oversized: it gets the scale of the wall and that of nature to overlap. The human body filmed at the foot of the tree is no longer the yardstick of the world but the sign of a relation. Benches are placed all along the projection, inviting people to sit down and watch the wind’s movements in the foliage, listen to the sound of the forest, and be caught up in the sense of being in the presence of something. Eija-Liisa Ahtila takes her distance from conventional cinematographic constructs and the types of representation of reality which they have deeply inscribed in our relations to moving images. Through this detachment, she explores parallel ways of representing the world.

The show at the M Museum opens with the artist’s most recent piece, Potentiality for Love (2018), which associates a portrait of a chimpanzee seen from behind, perched on a stool, a collection of colourful canvases, two interactive installations, and a panel made up of LED screens. The whole thing does not instantly build an impression of unity, as is the case in the multi-screen installations, with sound and the arrangement of the screens. Here we are rather faced with a dispersed unity where each part is individually displayed, while also working with the other parts situated in the same space. The canvases arrayed along a wall—an autonomous formal composition—lend the tone to an ensemble conceived as an open arrangement, with several centres, organizing networks of multiple meanings. Here again, perception and representation are the nub of the project. Right away, the eye is caught by the figure of the chimpanzee, filmed from behind, and turning round now and then. Two small tables beckon to sit down and place one arm beneath a screen broadcasting a 4K image of one of the chimpanzee’s arms. The installation juggles with the visual codes of the systems developed in didactic exhibitions: a sign invites the spectator to participate and an imprint in the wood of the table indicates the place of the arm. In this context, everything is done to suggest an interactive functioning, and the illusion is disturbing because, if the movements of the chimpanzee’s hand do not follow the spectator’s, the spectator, for his part, is instinctively prompted to follow those of the chimpanzee’s arm. The porousness between the bodies is obvious, as are the differences, and the situation is as amusing as it is disquieting. When the eye extricates itself from the arrangement, it then sees the movements of the hands and legs of a woman levitating in space, which become, visually, one with those of the chimpanzee’s hand. A bench placed very close to the LED panel invites onlookers to draw near, producing a pixellized perception, in which the technology conceived for the public place exposes the constructed nature of the image. The woman also gradually draws closer to the camera, with a smile on her lips reinforcing the word LOVE on her sweatshirt, spilling out of the frame. She is followed by her son who, likewise, approaches, floating in space. Levitation scenes are frequent with Eija-Liisa Ahtila, as in The Annunciation (2010), an installation also on view in the show. In Potentiality for Love, the bodies float in a state of cosmological beatitude calling to mind the characters in religious paintings, except that what is involved here is not divine heaven but the cosmos. Unlike most of the artist’s works, this one contains no dialogue. We are in the memory of the bodies, in that moment of childhood when you move forward to kiss your mother, when the smiling image is erased, and the bodies become intertwined. The memory of this ability to merge in the mother’s comforting body, and blend emotions, is the point of departure of this piece focused around empathy. The fragmentary structure, holding together very different narrative and technological styles, is, as is always the case with Eija-Liisa Ahtila, a quest involving the way in which a narrative is told as much as the meaning that emerges therefrom. Psychological and political explorations are here replaced by the presence of a complexity which carries on the questions raised by Studies on the Ecology of Drama (2014), seeking to deconstruct the anthropocentric perspective of film. How is a non-human vision of the world to be attained? In an animal’s gaze? In the eye of the camera, the vision machine? In a gravity-less body? The study is no longer discursive, it turns into perceptible exploration. Incorporated in a composition which contains them and needs them both physically and mentally, the spectators are nevertheless neither the triggering element nor the unifying element. They are simply there, wandering around in a space of potentialities. At some remove from the neuroses of the daily round, this latest work by Eija-Liisa Athila is disturbing in more ways than one, because it projects us into the future of humanity and into its relation with animality, already a feature of earlier works, such as the photographic series Dog Bites (1992-1997), where a naked woman on a bed assumed poses conjuring up a dog. In it, animality was explored in the eye cast upon it by the man, in its reduction to a series of ridiculous poses and wild looks. The artist, who is a reader of Jakob von Uexküll, Elisabeth de Fontenay and Agamben, continues her project about humanity’s potential to profoundly alter its relation to the world through empathy and love. The aesthetic power of the whole of Potentiality of Love, as well as its wit, usher in a scenario that is open to a major challenge to do with humanity’s future.