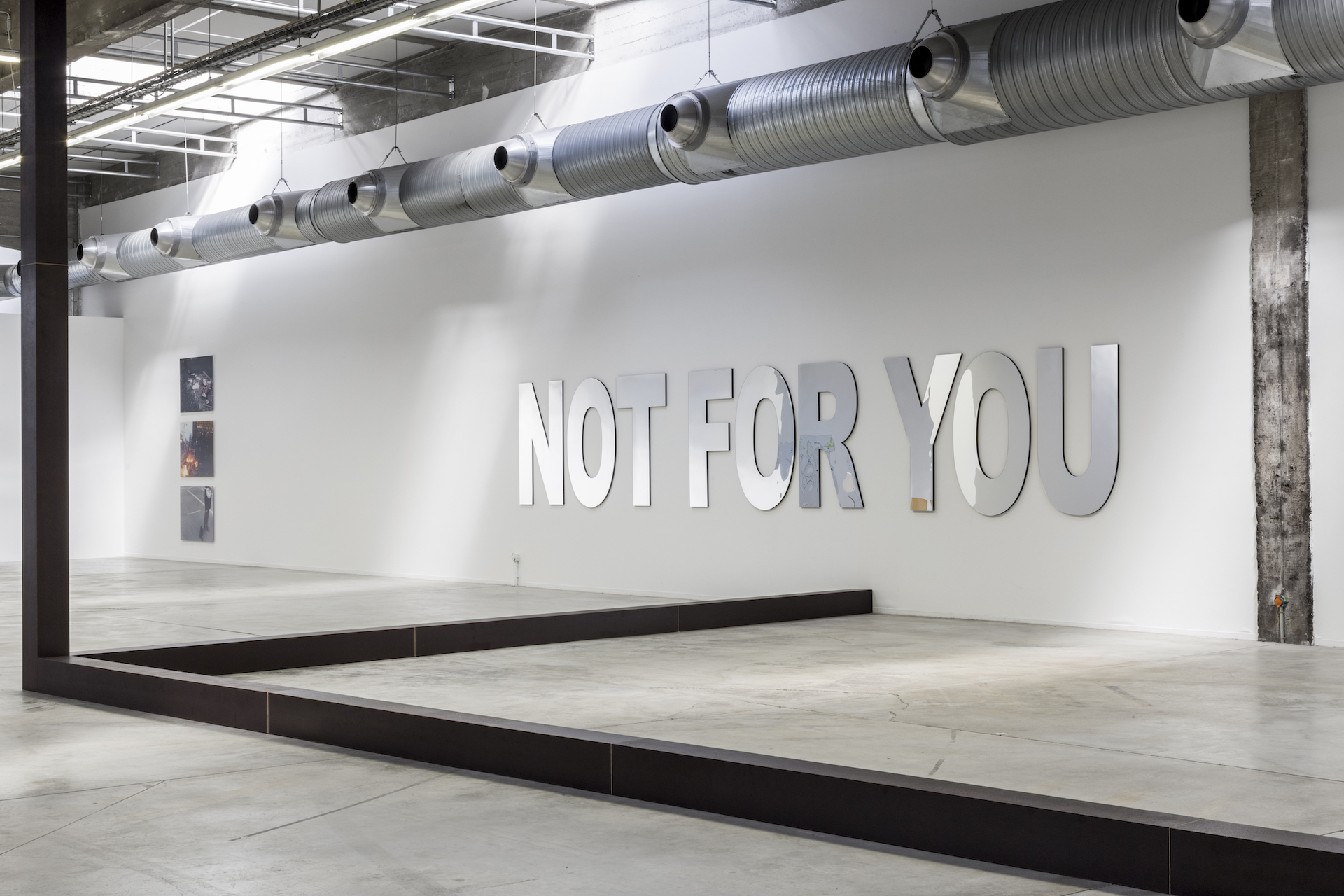 “The sensation of a machine […] the impetus of which seemed to reach to the very displays themselves”1, wrote Emile Zola in The Ladies’Paradise—a feeling of terror and fascination experienced in front of the marketing techniques of large shops. In this first solo show in France of Josephine Meckseper’s (b. 1964) work, we find the same seductiveness of the cheap product and, even more, the attraction for the gears themselves. The initial view is that of a vase with a striped pattern, somewhere between the Italian Memphis design, Brancusi’s sculpture, and a pot full of scrubbing-brushes. A utensil that might well be used for scrubbing the fetishism of merchandise. In the wall stand that introduces the exhibition at the HAB Gallery—and protects the rest of the display from prying eyes—, bath mat, hot water bottle, tie, brush and women’s tights under shrink wrapping all arrange a disturbing acquaintanceship with geometric abstraction. An Amanda Lear record adds a touch of glamour to the photograph of a demonstration in Washington against the war in Iraq. Another picture, taken in Berlin after some street clashes, shows a stripped-down supermarket trolley that has been used as a pyre. Further on, a maid in a white apron has taken off her ankle boots. She is waiting (for a change?). The tone is provided in this staged scene expressing the aestheticization of politics,2 when activism becomes a simulacrum under the camera’s eye.

In the old shed, the spacing between the pieces makes it possible to gauge their power of attraction. In the middle, a bunker made of chipboard and polystyrene foam (Untitled (Bunker)) is placed next to a sculpture of a pumpjack (Untitled (Oil Rig No. 2)). In 2012, two similar motorized sculptures were placed in a construction site at Times Square, in Manhattan. By moving pumps seen in Texas to the heart of the big city, the artist created confusion and brought the unacknowledged reasons for the war in Iraq to the forefront; it would have been nice to see the machinery set in motion here, to underscore its sexual dimension.

Meckseper retains from her studies at CalArts a liking for presentations of violent actions and objects, inherited from the “neo avant-garde models, like the Situationists”.3 This critical range, displayed since 2000 in assemblages conjuring up commercial display stands,4, likens her to the Appropriationists of the 1980s: a railing against the market by the forms of the market itself, no matter how slippery this may seem.5 The artist, of German origin, thus evokes the political involvement of her grandmother, who was close to the Red Army Faction. Yet her use of the readymade calls to mind Haim Steinbach’s shelves of mass-produced objects—representing capitalist seduction. Her recent output of abstract paintings made with brushes and plungers for unblocking toilets, verging on parody, seems to reduce abstract art to its most media-related signs (Sieben Sieben Sieben Sieben Sieben, 2016).6 The advertisements for underwear on sale, re-drawn by Malevich lines, have never been so effective. The system of remakes thus flirts with simulationism.

Several pieces by other artists, brought out of the FRAC’s reserves, are arrayed on shelves covered with mirrors. While those in Carquefou, where the second part of the project is being held, re-incorporate the work in an artistic and personal genealogy that is sometimes illustrative (Louise Lawler, Valie Export, Sherrie Levine, Martha Rosler, Johannes Kahrs…), those in Nantes acquire greater depth: the left gloves piled up by Jason Dodge give visibility to the ghostlike limbs on which the mercantile system is based (Left gloves bound in silver), while the colour of a bowl reflected on Michel Gerson’s stomach give infinite substance to the trace of the manufactured object on the body (Mimétisme, 1977). In a corner, a minimal sculpture by Melanie Counsell (a.i.b,, 2006) re-creates an enclosure confining a Meckseper painting and involves the consumer’s body: bestriding the work, or keeping at a distance? The works have recourse in many instances to the metaphor of fuel and vehicle, symbols of the country of residence chosen by the artist—the USA. The spare parts of luxury cars form so many sexual attributes: front lights suspended on a nickel display stand, rubber tyres on a conveyor belt. The good-looking merchandise excites the customer, but offers nothing but a void. The shed’s west wall reflects even Monica Bonvicini’s gleaming letters, which refuse to let us possess them, no matter how much we want to (Not For You, 2006).

If the artist suggests that the assembly line can be derailed (Sabotage on Auto Assembly Line to Slow it Down, 2009), as happened in 2009 when General Motors filed for bankruptcy, before the American State nationalized it, the products here remain shiny and sparkling, fresh from the factory. Unlike Cady Noland—ten years older, whom Meckseper knows well—who relegated the object to the rank of waste and scrap, the merchandise here regains its iconic status heightened by Pop Art. Criticism thus borrows from collage: it is by having recourse to montage that the publicity films produced by Ford, Toyota, Mazda, and many more companies, reveal the grotesque accumulation of special effects which turn them into war machines (0% Down, 2008). The accusation becomes even clearer when pictures of the shopping mall in Minneapolis are mixed, in an exaggerated concertina-like exercise, with military enlistment videos (Mall of America, 2009). In her day, Martha Rosler also used photomontage to rail against the Vietnam war.7 If criticism is always topical, is form not henceforth outdated?