For a Predictive Critique 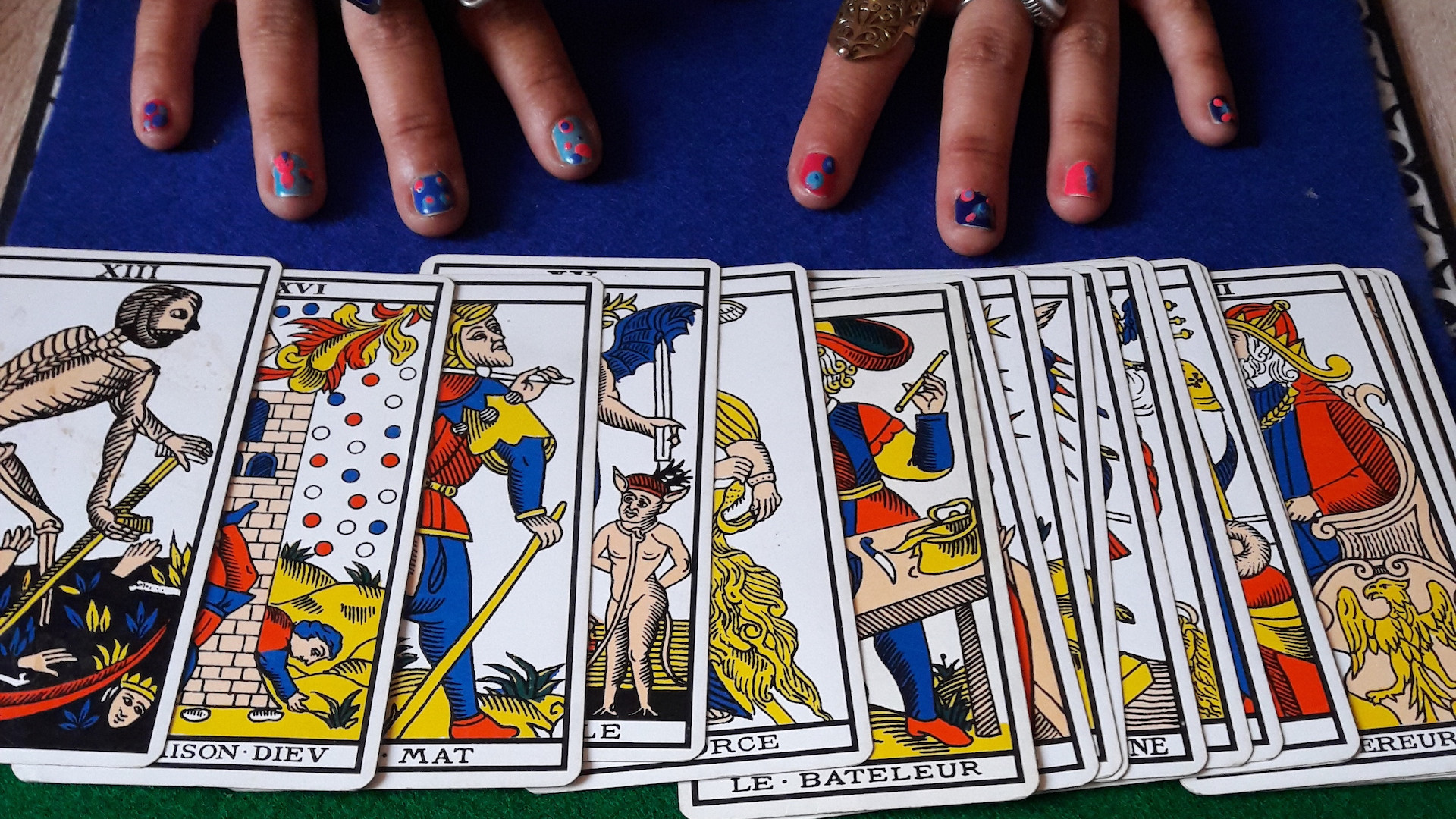 FIn July 2018, I asked my friend Nadia Barrientos to do a Marseille tarot reading for me about the future of contemporary art. Nadia is the best tarot reader I know; she is also an inexhaustible fount of knowledge about the history of the tarot, and never balks at reading cards for complete strangers in the bars where I often cross paths with her. We met during the seminar given by Denys Riout at Paris-I exactly ten years ago, which dealt with invisible works. So a decade later I asked Nadia to draw up a report on this contemporary art “milieu” to which we have gravitated and in which we are still afloat.

The deck was shuffled by Nadia, I cut it, and then in a few words I put the question intriguing me. Essentially, I wanted to know where all this would lead us. Where were we going, we artists, exhibition curators, art critics, in this flux which we often have such trouble glimpsing with the right remove…? Would the system we are acquainted with today collapse, undergo far-reaching changes, or grow stronger?

I chose three cards, the first symbolizing the present state of contemporary art, the second what will happen between the future and us, and the last representing the future. Two cards were added to this draw, one acting like an ally, the other like an obstacle.

I drew, in order:

Nadia, who is usually very placid, reacted thus, in this order, when she saw the first three cards: “Ooooh” (The Juggler), “[laughter]” (The nameless Arcanum), “[expletive]” (The Sun). Then she added: “It’s all very clear”.

Analyzing the cards, based on Nadia Barrientos’s words

The Juggler is an ambiguous and egoistic card: its character is forever moving between the true and the false, the visible and the invisible. The Juggler wears two-coloured shoes, he has all his conjurer’s tools on the table, he waits to divert, in the primary sense of the word, meaning: divert the attention.

This card, which opens the game, tells us that it will be necessary to go through stages, struggles and suffering to be able to reach a sort of maturity. It is this circuit which, at a given moment, runs in neutral, for even if its power is very strong, it is always in the flash of wit. It seems clear to me that drawing this card first conjured up the fact that this system, without alterity, preserved in its social enclave, is totally frozen in the belief in its symbolic prestige. When reality arrives, and it always ends up arriving sooner or later, the Juggler will collapse in a miserable way.

Contemporary art is in its infancy, it is an infans, it cannot speak. It is pure power, in the manifestation of this latter and not in action. It is in an onanistic attitude, and enjoys all the possibilities it contains. Because it is not in experience or concreteness, it remains in fantasy and does not dare face the material nature of life. This puerile, unconscious figure prefers to imagine its life rather than live it. As such, they follow Gaston Bachelard’s precept stated in The Poetics of Space (1957): “Always, imagining will be greater than living”. [Our trans.] This is a matter of opinion. The fact remains that art prefers this freedom, which may turn out to be a prison. It prefers to sacrifice nothing, and refuses sharing, alterity, confrontation, struggle and the roughest aspects of existence. It is in the game, but it lies to itself. Because it is a proud figure, it is blind to its own situation: it thinks that for all its life it will be able to keep up this illusion, but it is above all itself that it makes suffer.

[Author’s note: read, in the Tarot de Marseille (1949) by Paul Marteau, aboutthe Juggler, described as “man as active and creative power”: “This card has a favourable tendency, but because it is not formal it does not indicate the cure.

[…] A tendency to dispersal in action, and a lack of unity in operations. […]

We must not be afraid of the nameless Arcanum, which is also known as Death. Placed here, it designates a moment of change between the present situation of art and its future: it is what will make it possible to ripen what we currently know. If you focus on this card, you see that it represents a skeleton working a field with a scythe, a field with fertile soil, because it is littered with pieces of bodies and corpses. So it is a living soil, rotting: this is a very alchemical image of metamorphosis, which is forever re-combining the same amount of matter.

Needless to say, we can think of Lavoisier’s words inspired by Anaxagoras: “Nothing is lost, nothing is created, everything is transformed”. What also springs to mind is the motto of the alchemists, “Solve et coagula, meaning “Dissolve and coagulate”. We have reached such a point of sclerosis that everything must be dissolved and put back together again, so that the living world will be perpetuated. This is a form of justice and wisdom, this figure of death, which nevertheless frightens us so much. Death is at the heart of all the most ancient forms of human anxiety, and yet in this tarot deck it intervenes as a positive sign, because it incarnates change. It is true vanitas, because it stirs things up, decomposes and recomposes. The only question we can ask ourselves is whether this change will come within or without.

[Author’s note: remembering Aurel Kolnai’s words in On Disgust (1929): “The mark of the disgusting resides especially in the process of rotting and in what carries it. […] Let us repeat that what is dead never disgusts as a living substance having lost its vital functions, otherwise the meat in the butcher’s shop would be disgusting, and even a statue or a portrait would have a degree of disgustingness, which is in no way the case. […] Undoubtedly, on the extinction of life in rottenness, there is an association with an astonishing intensification of life, an increased manifestation of what of the living world is there”.] [Our trans.]

On this card, a very large sun lights up and weeps over a pair of young twins, placed in front of a low wall. The scene calls to mind the allegory of Plato’s cave, and evokes a clearing which may of course be blinding, but which manifests itself in a rational manner. Needless to say, all this can be unsoothing, because it is a raw reality, or else the truth. We do not always feel like seeing it, but at least the message is clear, even if it is painful: take off your masks, you can no longer pretend. The Juggler is dead, it is over. The twins, whom we find in the card of the Devil (Arcanum XV) talk to us of circulation among invisible forms. The otherness brought by this pair of twins is a very good sign, because it reverses the false alterity of the Juggler, which is just an asymmetry. These two present forces try to tame one another, they struggle at the same time. This is the clue—or the premonition—of a breath, of a dialectic issue which will come, and which is not present today. Contemporary art will find itself facing the world, and will have to team up with it.

[Author’s note: again in Paul Marteau’s Tarot de Marseille, about the Sun, thismysterious sentence: “This card only applies to great sentiments”. This is the raw reality: in 1977, Jiri Kovanda stared at the sun for such a long time that he cried. But the sun can be more clement. In 1968, during an intimist performance reenacted under the eye of a camera the following year, Gina Pane drove a sun’s ray into the ground, with the help of small mirrors. Thirty years later, Hreinn Fridfinnsson gathered in the palms of his hands, joined together like a bowl, the rainbow glow produced by a sun’s ray filtered by a simple prism. Burial of the sun, return of the sun.]

The card depicts a nude woman, mixing two liquids to a river. This gesture talks to us of fluidity, exchange, harmony, listening, and agreement between interior and exterior. The star is a dark, hidden star, which matures in inwardness. It is an Arcanum which has to do with intuition, desire, and dreams, too. The star is an occult figure, which is not necessarily visible. Even if it is certainly present, it remains in a form of darkness, because it is discreet and silent. The star doesn’t make for a burst of radiance, or a scandal, or an overthrow. All that is in shadow, but works in a subterranean way, though without diminishing its power.

[Author’s note: imagine that the star of the Marseille tarot is nothing other than Marcel Duchamp’s bride, whom he describes as having “shy power”, and being “a reservoir filled with the essence of love”. André Breton, in Arcane 17, evokes “star pallor”, the star as a “gleam”, as “pure crystallization of night”. And he winds up the 1947 appendix with these outstanding words: “My only star lives…”].

I would be tempted to say that art, and the whole system it carries along, will become more democratic: it will no longer be something just for specialists, but will become something for everyone. The death evoked by the nameless Arcanum will pass through the death of this closed circuit of a college of pseudo-specialists congratulating themselves on their mastery of meanings—which, in passing, they do not even master. This symbolic prestige will crumble because of the personal appropriation that everyone will be able to make of art, by extracting it from the gangue bogging it down. The star is a private, personal form: it is the power peculiar to every artist working on a form of dismantlement of the current system in time and patience.

[Author’s note: recalling the words of Jean Dubuffet: “What country does not have its little cultural art section, its brigade of career intellectuals? It’s obligatory”. The litany of its features is not particularly flattering: vitaminless, boiled water swimmer, the intellectual “operates too often sitting down: sitting at school, sitting at a lecture, sitting at a conference, always sitting. Often slumped. Dead sometimes, sitting and dead”.]

This is a card of power and foundation, with a seated figure, holding on to its insignia and its façade. It might be a metaphor of institutional power, the way artists play with it, and suffer from it. In this reading, the Empress is an outward force which corners, oppresses and prevents the renewal announced by the nameless Arcanum. Even if the Empress appears to be sulking, wings grow on either side of her, flesh-coloured. She is transfixed, but she is given the wherewithal with which she can fly away. Salvation will thus be abandoning this lethal façade and crossing over to the carnal.

[Author’s note: remembering that in Niki de Saint Phalle’s Tarot Garden, the Empress is one of the most impressive sculptures, more than 20 metres in length. Represented in the form of a sphinx, the Empress has a prominent breast, with a heart-bosom, and a flower-bosom. As carnal reincarnation, it is hard to do better.]

To sum up this reading

The present situation cannot come to anything good, because it is turned solely towards itself, and no longer manages to be in dialogue with the world around it. The collapse of this huis clos is inevitable, the break will be clear-cut and radical. Art will rebecome something natural for everyone, it will no longer be possible to enclose it within a symbolic and institutional perimeter, but it will once more become everyone’s tool of inscription in the world and in existence. Everything has been lost, and everything will be refound, differently. The reading could not be clearer.